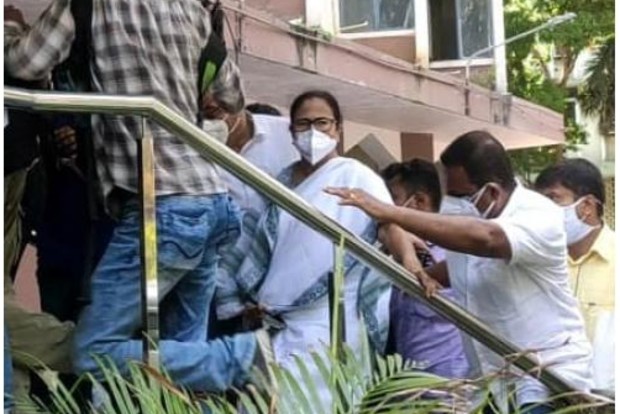 West Bengal Chief Minister Mamata Banerjee has started a sit-in in CBI’s Kolkata office to protest the arrest of four of her Trinamool Congress leaders, provoking an unusual Centre-state confrontation of sorts.

Banerjee rushed to the 15th floor of the ‘Nizam Palace’ where the CBI has the office of its anti-corruption cell.

“The way they have been arrested without due procedure, CBI will have to arrest me also,” the Bengal Chief Minister reportedly said at the CBI office in Nizam Palace.

Her spokesperson, lawyer Anindyo Raut told waiting media persons: “Didi (Banerjee) will not leave this CBI office until her party colleagues are released or until she is also arrested.”

He said Mamata Banerjee told the CBI officers they have arrested the four leaders, among them two sitting and two former ministers, without the mandatory notice. “These arrests are politically motivated and illegal. Suvendu Adhikari and Mukul Roy have been let off though they faced the same charges,” Raut quoted Mamata Banerjee as saying.

Central forces guarding the CBI office were not letting media persons inside the office — so speaking to CM Banerjee was not possible.

But she sent out Raut to let journalists “know her viewpoint”.

Along with the TMC leaders, former Kolkata Mayor Sovan Chatterjee was also picked up and later arrested by the CBI in the same case.

The TMC leaders were taken to the Central Bureau of Investigation (CBI) office in the Narada sting operation case. A few days ago, Bengal Governor Jagdeep Dhankhar had given permission to the CBI for prosecution of these TMC leaders.

Dhankhar had threatened the Trinamool Congress and said he should not be forced to use his powers.

Trinamool MP and lawyer Kalyan Banerjee told IANS the party leaders had “always cooperated with the CBI in these cases.”

“Now the CBI says they have arrested the four because they are submitting the charge sheet against them. If they are submitting charge sheet, that means the investigation is over. So why they need the leaders in custody and where is the mandatory notice of arrest! This is downright illegal and politically motivated, we will move the court and we have faith in it,” Banerjee told IANS.

Analysts blamed the Modi-Shah government at the Centre for provoking this confrontation.

“Modi and Shah have failed to stomach the party’s humiliating defeat in West Bengal. They are not only trying to take revenge but also divert national attention from their failure to handle Covid by provoking this confrontation. Who knows what they plan if this leads to violence,” said Sukhoranjan Dasgupta, veteran political commentator and writer of several books on West Bengal. — IANS