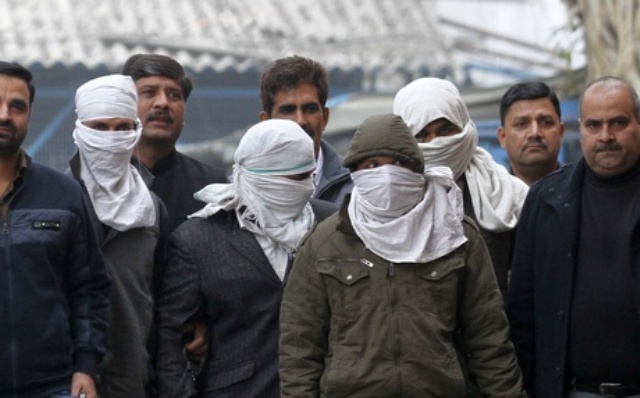 New Delhi: Parents of four boys, who were arrested on January 19 from district Haridwar (Uttarakhand) by Delhi police as Islamic State suspects, insisted that their sons did not commit any crime and there were innocent. While Jamiat-i-Ulama Hind (A) on Sunday has announced that it will take up the case of these four Muslim students who were picked by the Special Cell of Delhi police.

The accused boy’s parents Abdul Sattar, Sarfraz, Nafis Ahmad and Nasim Ahmad today visited the Jamait-i-Ulama Hind office and sought legal help from it after narrating the whole “concocted” story of the Police.

Police claimed that the accused had allegedly planned to target the ongoing Ardh Kumbh Mela at Haridwar, trains heading there and strategic locations in Delhi and NCR.

Parents said all the boys have no criminal past and they have been studying in different institutions and colleges.

Accused Azimus Shaan’s father Abdul Sattar, Meraj’s brother Sarfraz, Mohammad Osama’s father Nafis Ahmad and Mohammad Akhlaq ur Rehman’s father Nasim Ahmad stated that Police first arrested Mohammad Akhlaq while he was going to college on January 18, 2016 and then police sleuths had asked Akhalq to call Azeemus Shaan and Mohammad Osama over phone to come from their home here and also arrested them. When Meraj refused to submit the phone call and did not come, then police barged into his home and whisked away him along with his lap-top computer. The Police also seized four mobile phones from them. Around 2 AM on midnight, police called all of us to inform that they have arrested all the four boys and were kept at Special Cell in Police Thana Lodhi Road, New Delhi”.

“When we got the information, on the very next day (January 19) we all proceeded to Police Thana Lodhi Road to see our children, but after torturous waiting for 4to 5 hours, we were allowed meeting our children”.

Parent told that “their sons were mercilessly beaten up by the police and all of them were very frightened”.

Police officers told us that “Akhlaq’s face book and mobile phone had been used for chatting with terrorists and other three boys’ name had cropped up in the talks. They were members of the terror group Islamic State and their activities were under suspicion.”

Police said all the boys were charged under UAPA’s sections 120B, 18 and 20 and they were sent for 15-days custody in police.

Parents also revealed that Police reached the house of one of the accused Meraj along with him on January 22 in Landhaura but did not find any incriminating thing after thorough search of his house. Then it forcefully took out Rs 41,000 from Sarfraz’s pocket, who is brother of Meraj, in front of people and put this money in the cupboard of Meraj’s home and wanted to show it as recovered from his house and asked his brother Sarfraz to sign on the paper but he refused.

“When Sarfraz refused, the police team abused him and put revolver on his forehead to force him for signing on the paper but he did not oblige,” they added.

The police team then got to Azimus Shaan’s home and searched his house but found nothing and it took away empty box of his mobile phone. Afterward, the police team went to accused Osama’s farmland at Shikarpur and showed that it has recovered match-sticks from the tube well.

Meanwhile, Maulana Syed Arshad Madani, President Jamiat-i-Ulama Hind has strongly condemned fresh wave of arresting Muslim youths on large scale and targeting Muslim educational institutions. He described the arrest of Muslim youths as part of the hidden agenda of the BJP-led current dispensation at the center which has been now come out into open.

Maulana Madani said the arrest of four Muslim students from Haridwar mere on charges of chatting on internet is a clear pointer towards this. He said it has become routine for Hindutva sympathizers and activists to abuse and disparage Prophet Muhammad and Islam on internet with impunity.

He said the objective of the current spate of witch-hunting of Muslim youths and educational institutions in the name of fighting terror is two-fold, one is to terrorize young men of the community and the other one is to shoo away Muslims from education. He said the arrest of more than two dozen Muslim youths in the last 24 hours have completely exposed the ‘intent and policy’ of the Modi government.

“We are maintaining from the day one that the present government has a secret agenda which is now being implemented openly as arrest of Muslims on a bigger scale is a clear pointer toward this,” said Jamiat-i-Ulama Hind president.

The conspiracy to do away the minority character of Aligarh Muslim University and Jamia Millia Islamia by the government is part of that hidden agenda as it wants Muslims do not get quality secular education that enabled them to compete in the higher services examinations and to stake claims for top posts.

Exposing the double standard of law enforcing agencies, Maulana Madani said when a match stick is burnt in a Muslim house it is called as an explosive material and on the contrary when bomb went-off while making-bomb in the house of Hindutva activists, it is called a fire cracker or fire-cracker making factory.

He warned that the double standard of the government would push the country into anarchy and would have serious repercussions on the unity and integrity of the country.

He also urged the secular sections of the society to raise their voice against witch-hunting of Muslims as it is not only concerned to Muslims but also to the whole nation.

Maulana Madani, who is out of the country, has directed to take up their case and appointed on advocate Saaram Navid to pursue their case who is also looking after cases of Maulana Anazar Shah Qasmi, Maulana Abdul Rehman and Abdul Sami. Saarm Navid will meet the accused and then will approach the court. Jamiat-i-Ulama Hind lawyer will also plead the court for daily medical checkup of the accused.

Maulana Arshad Madani also made passionate appeal to the national media especially Hindi press and channels to see a game behind arrests rather broadcasting police and government versions. He further said an appeal to media is not to become tool, but investigate…Media coverage and taking government version as gospel truth is travesty of justice and complicates situation for families of accused, who we are sure will be proved innocent…