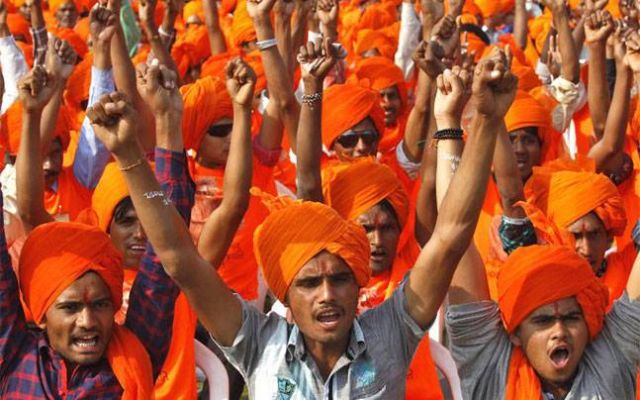 Bengaluru: With Karnataka going to polls in the first half of 2018, a sinister attempt is underway by Hindutva forces to disturb the peace in the region. Inflammatory speeches and statements are being issued, small incidents are given a communal colour with the intention of polarising voters by inciting violence, prejudice and hate.

After T Raja Singh Lodh, a Bharatiya Janata Party (BJP) legislator from Telangana called for violence bragging about ‘Hindu Rashtra’ and Uttar Pradesh Chief Minister Yogi Adityanath asked voters to decide whether they want the land of Bajrang Bali (Hindu monkey God who possesses supernatural powers) or a land of worshippers of Tipu Sultan, one more leader of the saffron party recently posted a provocative tweet perhaps with an aim to add fuel to the communal fire that was spread following the attack of a teenage Hindu girl in Magod village, just outside the port town of Honnavar in Karnataka’s Uttara Kannada district.

The girl was allegedly threatened by two men on her way to school. The men, who fled the scene when she shouted, allegedly left two superficial cuts on her hands. Soon, a message was floated on WhatsApp that the girl was attacked by two Muslim men.

Adding fuel to the fire, BJP MP from Karnataka Shobha Karandlaje said on December 14 that “jihadis” tried to rape and murder a minor girl in Honnavar. She accused the Karnataka govt of silence and inaction.

“Jihadis tried to rape and murder a girl studying in 9th std near honnavar.Why is the govt silent about this incident? Arrest those who molested and injured this girl. Where are you CM @siddaramaiah?” she wrote on microblogging website Twitter.

Jihadis tried to rape and murder a girl studying in 9th std near honnavar.Why is the govt silent about this incident?Arrest those who molested and injured this girl. Where are you CM @siddaramaiah?

But a probe into the incident by the police subsequently revealed that the girl inflicted injuries on herself in order to escape her stalker, whose name is Ganesh Ishwar Naik.

Uttara Kanada SP Vinayak Vasantrao Patil confirmed that the injuries are self inflicted. “She said in her statement that she was being harassed by a boy of her own village. She took the step to escape the harassment and pressure. Her statement was recorded before the judicial magistrate under section 164 of CrPC. Forensic expert had examined the injuries and ruled out any attack with a knife,” he told MuslimMirror over phone.

Asked about the controversial tweet of the BJP leader, he said an FIR has been registered suo moto against Karandlaje under sections 153 (wantonly giving provocation with the intent to cause a riot), 153A (promoting enmity between groups) and 505(2) (statements creating or promoting enmity) of IPC.

But the undeterred leader repeated the lie in another tweet despite the clarification by the police. “Govt which has failed in providing safety to women in Karnataka now tries to stifle my voice through a FIR. @siddaramaiah Govt protecting Jihadis,” she wrote on Twitter.

Govt which has failed in providing safety to women in Karnataka now tries to stifle my voice through a FIR.@siddaramaiah Govt protecting Jihadis. pic.twitter.com/aEFmZFBuvi

Delhi BJP spokesperson Tajinder Bagga joined the bandwagon, tweeting in support of Karandlaje and parroting her claim that “Jihadis tried to rape and murder a girl”.

Locals say Honnavar, a small port town in the Uttara Kannada district in Coastal Karnataka, has never been more polarised. The schism between the Muslims and Hindus has been so deep that they refrain from speaking to each other.

Hindu auto-rickshaw drivers have been asked not to offer rides to any passenger from the other community, lawyers working in the local court steer clear of bail pleas for a few Muslim men arrested recently, and several Muslim families continue to remain within the confines of their homes in fear.

It all began with the mysterious death of 19-year-old Paresh Mesta, who belonged to the fishing community. Mesta’s body was recovered from a pond in Honnavar on 7 December, following a communal riot between Hindus and Muslims.

The last time Uttara Kannada experienced major violence was during the 1993 Babri Masjid riots, and even that was confined to Bhatkal town.

The divisive politics over Paresh Mesta’s death has intensified in the fishermen community which has had differences with the minority community over fishing trade.

The BJP is keen on regaining its influence in the region which was for long its bastion since 2004. Uttara Kannada, Dakshina Kannada, Udupi and the neighbouring Chikkamagaluru district which houses the Baba Budangiri hills has a total of 23 Assembly segments.

The Congress won 15 seats and BJP seven seats in the 1999 elections. But after the 2002 violence over a sufi shrine in Baba Budangiri hills, BJP’s tally shot up to 17 seats. In 2008, however, that dipped to 15, and by 2013, the party could win just five, as the region was swept by anti-incumbency. Now, the BJP is focussed on recovering lost ground in the 2018 elections.

Not only this, the BJP – over the past six months – has opposed the Tipu Jayanti, pressed its claim on the Hindu ownership of the Baba Budangiri shrine and conducted Hanuma Jayanti celebrations. It has now taken the battle to Uttara Kannada.

Chief Minister Siddaramaiah has charted a different political strategy, relying on populist schemes, stitching up a coalition of OBCs with a promise to increase reservation to over 70% and trying to break the BJP’s influence in the powerful Lingayat community.