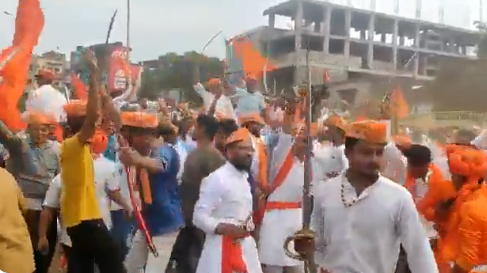 “India now may be entering the stage of anti-Muslim pogroms,” says Ashutosh Varshney, who teaches social sciences and political science at Brown University in the US. “This is because the BJUP government is abandoning neutrality in violence,” he says.

Varshney made this statement when he was asked to comment, on why many incidents of anti-Muslim violence are being reported from different parts of India?

The Ram Nauvi festival on Sunday, April 10, 2022, witnessed a spate of anti-Muslim violence in India. The same was witnessed on Saturday, April 16, 2022, during Hanuman Jayanti’s processions.

While explaining why there is a sudden upsurge in anti-Muslim violence seen in India, Varshney said, “I have studied communal riots since the 1990s, but the current violence against Muslims in India is very different and India may be entering the stage of the anti-Muslim pogrom.”

Varshney was commenting about violence against Muslims, especially in those states that are ruled by the BJP. His comments were broadcast in a podcast discussion with Sidharth Bhatia at ‘The Wire.’

Varshney minced no words when he said, “the prime minister is keeping silent because he believes in this ideology” whereas India is also not worried about western criticism because “the calculation is  India is needed by the west”.

Ashutosh Varshney is a Sol Goldman Professor of International Studies and the Social Sciences and he also directs the Center for Contemporary South Asia.

He has penned books such as Battles Half Won: India’s Improbable Democracy (2013), Collective Violence in Indonesia (2009), Ethnic Conflict and Civic Life: Hindus and Muslims in India (Yale 2002), India in the Era of Economic Reforms (1999), and Democracy, Development and the Countryside: Urban-Rural Struggles in India (Cambridge 1995).