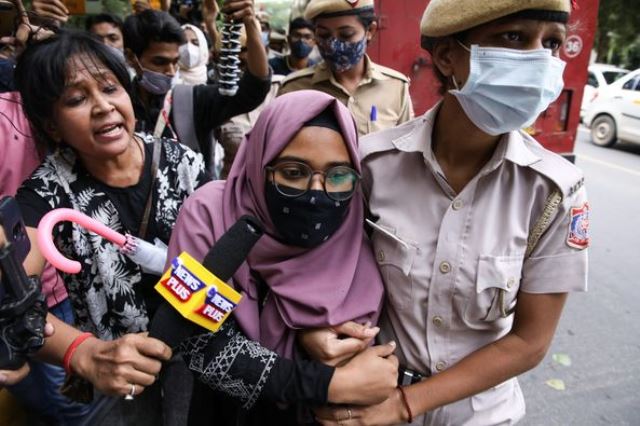 The Delhi Police on Friday detained people outside Assam Bhawan as they were protesting in connection with the Assam Police’s brutality against landless Muslims in the state’s Darrang district. They were taken to Mandir Marg Police Station.

The protest was called by Fraternity Movement. A poster circulated by the group read, ”rise in rage against killing of Muslims by uniformed terrorists in Assam.”

Shamseer Ibrahim National President and other Leaders of Fraternity Movement (Student wing of WPI) are detained by the delhi police while protesting against #AssamPolice at Assam Bhawan. pic.twitter.com/qqdzorBvg6

On Tuesday, policemen in riot gear and armed with guns and sticks chased and attacked people protesting over the Assam government’s eviction drive against landless Muslim families in Assam’s Sipajhar.

A photographer was seen jumping over the body of a man killed by the police. The photographer identified as Bijay Shankar Baniya was hired by the district administration.

Assam Chief Minister Himanta Biswa Sarma indicated that the policemen resorted to action in self-defence. He has ordered a probe – to be headed by a retired High Court judge – into today’s violence.