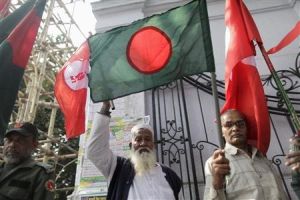 Agartala, Aug 5 : Over 1,800 Bangladeshi tribals, who fled across the Indian border into Tripura after ethnic strife broke out with non-tribal Muslims, returned to their villages after Dhaka assured them security, officials said here Monday.

A Tripura government official, quoting reports from across the border, said Bangladesh Minister of State for Chittagong Hill Tracts (CHT) Affairs Dipankar Talukdar had visited the trouble-torn areas in the mountainous regions Sunday and assured the affected tribals that stern action would be taken against those responsible for the violence, and security would be provided to minority tribals.

Officials of BSF and BGB held a meeting at the bordering village of Karbook, 155 km south of here, and persuaded the tribals to return home.

Over 1,800 men, women and children of Chakma and Tripuri tribes had taken shelter in the India-Bangladesh border village of Karbook after fleeing from five villages in Khagrachari district under CHT.

Rawat said: “The tribals entered Indian territory Saturday evening after ethnic troubles in Bangladesh. They were stopped at the border by the BSF outside the barbed wire fence. We provided them food and other assistance.”

The tribals, mostly Buddhists and Hindus, fled the CHT after clashes over the reported abduction of a local leader of the Bangladesh Nationalist Party (BNP), the main opposition in Bangladesh, led by former prime minister Khaleda Zia.

An official of the Tripura home department said the state government has informed the union home ministry about the development.

“At least one tribal villager was killed and four others were seriously injured. About 500 tribal houses were burnt to ashes,” Suhas Chakma, director of Delhi-based rights group Asian Centre for Human Rights (ACHR) said in a press release.

Additional troopers of the BSF have been deployed along the India-Bangladesh border to deal with the situation and to prevent refugee influx into Indian territory.

In 1986, over 74,000 tribals – mostly Buddhist Chakmas – took shelter in southern Tripura following violent attacks on thousands of tribals by non-tribals.

Demanding sovereign status for tribals in CHT in southeast Bangladesh, separatist outfit Shanti Bahini was at that time engaged in a guerrilla war against the Bangladesh government.

All the 74,000 refugees returned to their homes in 1997-98 after the Bangladesh government signed a peace agreement with Shanti Bahini.

Tripura shares an 856-km border with Bangladesh, which is porous because it extends over mountains that are densely forested. Over 85 percent of the border has been fenced.—IANS.