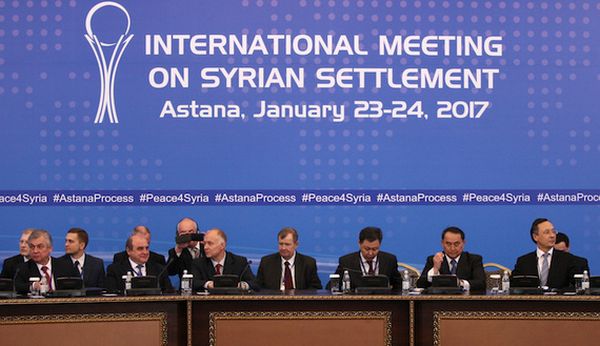 The talks held on January 23-24, in Kazakhstan’s capital Astana, should be seen against the grim toll of the turmoil in Syria that began in February/March of 2011: More than half-a- million Syrians dead, half the 22.5 million population displaced — with over five million outside the country — and unfortunately no end in sight for the inexorably unfolding tragedy.

The participants were seven: Russia, Turkey, Iran, the Syrian regime, the UN represented by its mediator Staffan di Mistura, the armed rebels led by Mohammed Alloush (politburo member of Jaish al-Islam — one of the armed groups) and the US as an observer. The initiative for the talks came from Russia, Turkey and Iran, with Russia in the driver’s seat. The three are the “guarantors” of the cease-fire announced on December 30, 2016.

Turkey has recently moved closer to Russia on Syria and there is a degree of understanding between the two along with some mutual accommodation, though they still might have differences about the desired final outcome. Russian President Vladimir Putin adroitly chose the date January 23 keeping in mind the presidential inauguration of Donald Trump — former President Barack Obama had, ever since the annexation of the Crimea in 2014, “demonised” Putin.

Let us look at the political context of the talks. On December 22, eastern Aleppo, held by the rebels since 2012, fell to forces of Syrian President Bashar al-Assad supported by Russia and Iran. On December 30, a ceasefire and talks at Astana were announced. The ceasefire, though broken repeatedly, more by Assad than by his foes, has generally held mainly because the rebels, receiving less and less external support, are in no position to fight Assad. They cannot defy Turkey as it either provides military supplies or permits the passage of such supplies from others through its territory. The ceasefire did not necessarily indicate a serious readiness to talk and settle matters on the part of the warring foes.

Some Kurds attended the talks, but Turkey saw to it that its foes PYD (Democratic Union Party) and YPG (People’s Protection Units) were not invited. YPG is closely allied to the US in its fight against the Islamic State. YPG provides the boots on the ground while the US Air Force carries out the bombings.

The Assad regime was represented by its Permanent Representative to the UN, Ambassador Jaafari. Iran, Russia, and Turkey too were represented at a similar level. There was a significant difference between Astana and the various meetings in Geneva, Vienna and elsewhere that have taken place under the auspices of the UN or that of US-Russia. This time the rebels were represented not by civilians but by the commanders. Russia sent General Stanislav Gadjimagomedov, underlining the military dimension of the talks.

There was difference of opinion between Iran and Russia over inviting the US as Trump has adopted a hostile stance towards the Iran nuclear deal. But Russia prevailed, as expected. Russia had earlier said that it was inviting Saudi Arabia, Qatar, Jordan and Egypt. Obviously, the decision to invite them was changed.

The delegation of the Syrian regime and the other delegates from that country refused to talk directly to each other. They communicated through the “guarantors”. Jaafari referred to the rebels as “terrorists” as, for Assad, anyone opposed to him is a terrorist. The three “guarantors” issued a joint statement read out by Kazakhstan Foreign Minister Kairat Abdhrakhmanov, not subscribed to by the rebels.

The joint statement of the three guarantors is rather anodyne. They “reiterate their determination to fight jointly against ISIL/Daesh and al-Nusra (Front) and to separate from them armed opposition groups”. This is nothing new.

The guarantors “express their conviction that there is no military solution to the Syrian conflict and that it can only be solved through a political process”. This is rather strange as the three countries are engaged in a military solution to the Syrian crisis. They have compelled their client, namely, the Assad regime, to attend the meeting only to see whether it can get the rebels to surrender their arms as a pre-condition to political talks.

The rebels did not associate themselves with the joint statement because their demands about the lifting of siege, release of prisoners, and delivery of aid to besieged areas were not agreed to by Assad. In short, the surrender that Assad was wanting did not occur.

The next round of talks is in Geneva under the auspices of the UN on February 8. Even more important than the Astana talks is the likelihood of Trump and Putin formally agreeing on a united fight against the Islamic State and al Qaeda. The latter two hold considerable territory — with the Islamic State alone holding territory as large as Florida.

We have to wait and watch how that war will unfold as it will cause large-scale civilian casualties. Even if that war succeeds, peace and normalcy will elude Syria unless there is a political resolution of the crisis, the moot questions being Assad’s continuance in power and the shape and future of post-Assad Syria.

(Ambassador K.P. Fabian is a retired Indian diplomat who served in the Middle East and has deep knowledge of the region. The article is in special arrangement with South Asia Monitor/www.southasiamonitor.org)—IANS