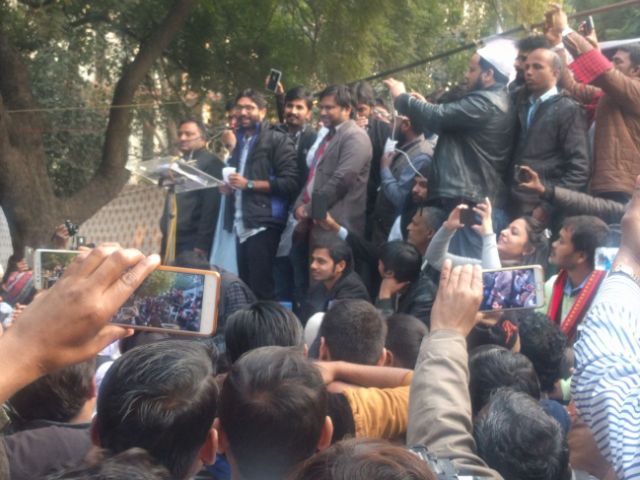 New Delhi : Gujarat Dalit leader Jignesh Mevani on Tuesday attacked Prime Minister Narendra Modi asking why atrocities were being committed against Dalits, minorities and farmers in India and charged the BJP and RSS with instigating anti-Dalit violence in Bhima Koregaon in Maharasthra.

“The way in which Hardik (Patel), Alpesh (Thakore) and Jignesh (Mevani) with the support of the youth in Gujarat brought the BJP down from over 150 seats (target set by BJP in Gujarat) to 99 seats… That is the reason we are being targetted,” Mevani told his Yuva Hunkar rally here.

“And this is the reason why the people of the (Rashtriya Swayamsewak) Sangh and BJP spread violence in Bhima Koregaon,” he said, referring to the violence that broke out in Bhima Koregaon near Pune last week in which one person lost his life and several vehicles were damaged.

The rally for which the Delhi Police had originally denied permission was held at Jantar Mantar, a short distance from Parliament House in central Delhi. But Mevani and his supporters shelved plans to take out a procession to the Prime Minister’s Office.

The newly elected MLA also said that when he fought elections in Gujarat he always spoke about bringing people together.

“Throughout the election campaign, we said that for 22 years the BJP followed the politics of division, while we always spoke about binding people together,” he said. “We don’t follow love-jihad.”

“We only talk about love and harmony. We will celebrate April 14 and Valentine’s Day too,” he said.

“I don’t have to answer it but you have to answer me… This you have to answer why Rs 15 lakh didn’t come in everyone’s account, why no jobs to youth? Why farmers were shot dead in Mandsaur? Why no justice to the Una Dalit victims? Why Najeeb Ahmed went missing? Why Rohit Vemula died? We’ll ask all these questions from you, (Prime Minister Narendra) Modiji.”

Mevani, who won from Vadgam in Gujarat in Assembly elections, said elected representatives were not allowed to speak and that was Gujarat’s model.

Further targeting Modi, Mevani said he supported the government’s “Digital India” initiative but asked the Prime Minister to ensure a technology first “so that no one is made to die inside a sewer”.

He also sought an immediate release of Bhim Army founder Chandrashekhar Azad — a Dalit leader who has been jailed and the National Security Act (NSA) slapped against him for allegdly instigating violence in Saharanpur in June last year.

Former Jawaharlal Nehru University student leader Kanhaiya Kumar said the rally had been called “to protect the Constitution and not for any religion”. He alleged that the BJP was creating communal divisions to rule.

“The BJP does not want ‘Ram Rajya’… In the fight between Allah and Ram, the victory will always go to Nathuram (Godse),” said the student leader.

Earlier, scores of people gathered around the barricaded Parliament Street for the protest march planned by Mevani.

“No permission has been given to anyone (to hold a rally),” Joint Commissioner of Police Ajay Chaudhary told reporters here.

The Gujarat lawmaker slammed the police and the central government for denying permission to the protest.

“An elected representative is not allowed to speak… This is extremely unfortunate.”

Some 1,500 security personnel in riot gear, with tear gas launchers and water cannons, were deployed on Parliament Street. As many as 42 organisation — parties, associations and student groups — took part in the rally.