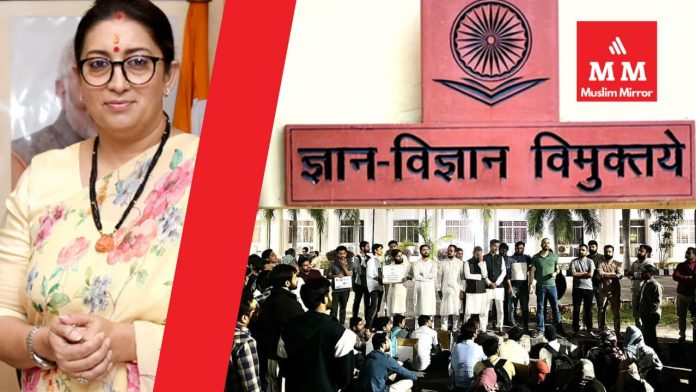 The Centre is facing criticism from politicians, students, and student bodies after it decided to terminate the Maulana Azad National Fellowship (MANF), a grant for students from minority communities established during the UPA rule as part of implementing the Sachar Committee recommendations, from this academic year.

Union Minority Affairs Minister Smriti Irani, on Thursday, said that the decision was taken because the fellowship overlapped with other programmes.

The decision didn’t go too well with several student bodies, student activists, and politicians across the country, some of whom have called for protests against the government.

Protests against the decision were held by the Maulana Azad National Urdu University (MANUU) and University of Hyderabad (UoH) student bodies on Friday.

Talha Manan, a student leader from the MANUU, while talking to Muslim Mirror said that several student organizations in the university participated in the protests against the decision.

“Discontinuation of the MANF and the pre-matric scholarship can’t be seen in isolation, it’s a part of a series of incidents against Muslim students,” he said

“The decision is also against the idea of scholarship and reservation,” he said, adding that reservation and scholarships are provided to uplift the students from marginalized communities but the government seems to be against it.

The student bodies, in Hyderabad, had called the move an “attack on the minority students” who were funded by the ‘ministry of minority affairs to pursue higher education.

"Again attack on edu acces of minorities" a student to @TheSouthfirst pic.twitter.com/6l4H6cec7b

“Narendra Modi-led BJP government has decided to discontinue the fellowship. This will lead to exclusion of the already under-represented minority communities in academic spaces. This is the latest, in a series of steps of the Union government, hell-bent on destroying public education in India,” read a poster that called for protests against the decision.

Asif Khan, a research scholar at the Aligarh Muslim University, told Muslim Mirror that “the decision to discontinue MANF will be a hurdle to Muslims in pursuing higher education.”

“Targeting minorities is against the constitutional foundations of the country, we oppose it openly,” he said.

Dr. Md. Jawaid, a Member of Parliament from Bihar’s Kishanganj, wrote a letter to the Union Minority Affairs Minister and said that discontinuing the fellowship “would have grave impacts on the education of students” from minority communities– Sikhs, Christians, Muslims, Jains, Parsis, and Buddhists.

I strongly demanded for immediate withdrawal of GOI’s decision to stop MANF. Had an informal talk with @smritiirani in which I was given assurance that no existing beneficiaries will be stopped from availing #MANF.

Govt shall continue this fellowship! pic.twitter.com/CTwFYOBxlE

Former Jammu and Kashmir Minister of Education, Naeem Akhtar, took a jab at the Centre and said that things which are in the name of a Maulana are “anti-national”, according to the Centre.

Kaleem ul Hafeez of the All India Majlis-e-Ittehadul Muslimeen (AIMIM), took to Twitter and said that the discontinuation of the fellowship is “very sad and shows anti-minority thinking of BJP”.

“Is this Sabka Saath Sabka Vikas?”

“On the one hand, there’s 10% reservation for the Savarnas, on the other education of minority communities is being locked down,” he added.

Amal Chandra of the Indian National Congress said that “the vision of RSS-BJP is that the poor, minorities & marginalized should not have access to higher education in India.”

“By discontinuing the MANF scheme from 2022-23, they are showing how their way of end justifies their mean. Deplorable!” he said.

Trinakur Bhattacharya, West Bengal State President of the Trinamool Chatra Parishad said that he strongly condemns the union government’s decision to discontinue the Maulana Azad National Fellowship for minorities from 2022-23.

“MANF was the financial lifeline for the students who came from socially & economically marginalised background,” he said.

The Students Islamic Organisation of India (SIO), said that the rollback of pre-matric scholarship and Maulana Azad National Fellowship (MANF) showed the state’s blatant disregard for educational equity and washing its hands of key domains such as education.

“The continuous attack on access to education of minorities shows the callous attitude of the present government, whose hollow rhetoric of ‘sabka sath, sabka vikas’ has been unmasked in the broad daylight,” the organization’s National Secretary Fawaz Shaheen said in a statement.

He said that “there’s an urgent need for condemnation and mobilization of conscientious citizens against this onslaught on education and the dignity of minorities.”

We demand immediate withdrawal of GOI’s decision to discontinue #MANF for minorities. Is this how you implement #SabkaVikas? Stopping a fellowship scheme named after Maulana Azad is an insult towards our nation builders too.@smritiirani @ShashiTharoor @INCMinority @tnprathapan pic.twitter.com/fzl4PlMRVb

The Students’ Federation of India (SFI) said that the “attempt by the Union Government to discontinue the MANF scheme must be staunchly resisted by all those who seek to democratize India’s educational system.”

“This misguided step by the Union Government comes on the back of a series of severe delays in the disbursal of the fellowship, with scholars recently reporting backlogs of over nine months. Coming in the immediate wake of the immense distress faced by researchers owing to the lack of systemic and institutional support during and after the Covid-19 pandemic, the anxiety of unpaid bills and mounting backlogs of expenses owing to the above-stated delay had already caused a large number of scholars and researchers from minority communities to put a pause on their research activities. This is pertinent since for many such individuals, the MANF scheme provides a lifeline for the families of scholars as well,” the SFI said in a statement.

“This past year has already witnessed attempts by the Sangh Parivar to deny the very fundamental right to education to young Muslim women and to establish an aggressive majoritarian cultural nationalism by usurping spaces of education. The decision to discontinue the MANF, under whatever guise such a decision might come, must be necessarily seen as a further effort in this direction – to deny access to education, and to ensure that higher education continues to remain the exclusive enclaves of the privileged few,” the organization said

We Demand the reinstatement of #MANF. pic.twitter.com/A5V98fFS5u

Deepanshu Bhatt of the IYC said that he strongly opposes “the anti-minorities and anti-research decision of BJP government” to discontinue the fellowship.

“This decision is one of the steps towards disempowering minorities in India by the RSS,” he said.

The Maulana Azad National Fellowship, which was established in 2009, offered MPhil and Ph.D. financial aid over a five-year period to students from six registered minority communities, including Buddhists, Christians, Jains, Muslims, Parsis, and Sikhs.

The programme was introduced as a part of efforts to put the Sachar Committee’s recommendations into action, which looked at the socioeconomic situation of Muslims in India.