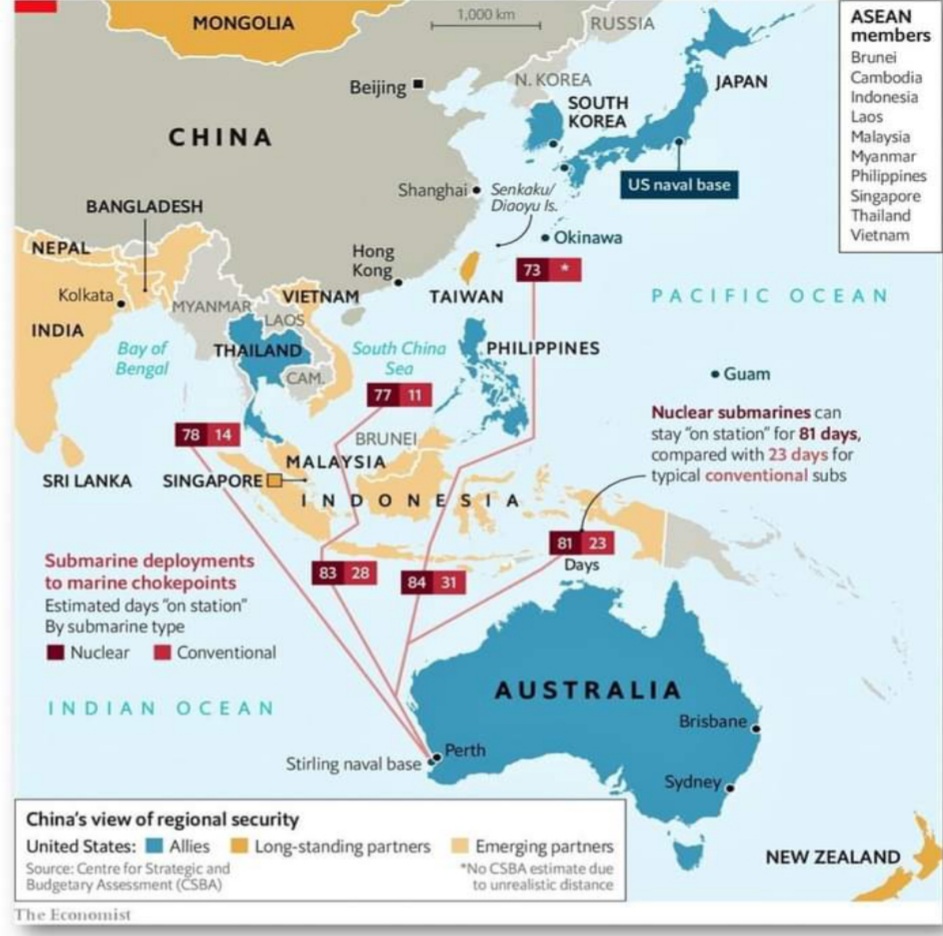 China, in the last twenty years, has emerged more as a geo-economic giant, while AUKUS is a geostrategic platform, seeking to contain China’s growing economic supremacy without jeopardizing the prospects of global growth. Will it be possible for the Superpower US to stop Beijing, questions the efficacy, motives and the end result of the ensuing tussle.

The cancellation of the USD 66 Bn submarine deal by Australia with France, in first instance, appeared an economic maneuvering of the UK and the US. However, in reality, it was nothing short of a “strategic blitzkrieg” in the Indo-Pacific. After Afghanistan, this is the second policy volte face of the Biden administration which has created confusion among both allies and the enemies equally. France termed it “stabbing in the back” by one of the oldest partners and out of rage, President Macron has called back ambassadors from both Australia and the US. French people view it as a setback to one of the oldest ‘partnerships’ but they are equally critical of giving ‘anger’ a preference over diplomatic patience.

The deal which is called AUKUS is a trilateral security alliance between Australia, the United Kingdom and the United States. The UK and the US have combined their technological prowess to build 8 Virginia class nuclear submarines for Australia against 12 diesel-electric run conventional subs (submarines) which Canberra had signed with France in 2016.

Actually, AUKUS does not signify only a shifting of arms purchase from one country to another but it is also indicative of changing geo-strategic preferences in the Indo-Pacific. Australia chose the US, while the US too realized the need of changing the mode of deterrence from land, air to maritime against China bullying in the Indo-Pacific.

Why did Australia break the deal?

Choosing nuclear submarines over conventional diesel-electric ones and deepening strategic ties with the US over France in the Indo-Pacific against China seem to be the precise answers. The nuclear-powered submarines have superior characteristics of “stealth, speed, maneuverability, survivability and almost limitless endurance when compared to conventional submarines”.

Technologically too, nuclear submarines are well equipped to keep vigilance over China in the ocean away from the Australian coast. Nuclear subs hardly create noise in deep waters and make its detection hard, while its submergence capacity under the water is also much more consistent and higher than the conventional subs. Nuclear subs can stay more than 81 days in water from its bases, while the conventional diesel-run submarines are only effective to guard the coastal areas which cannot go far away stay longer than 12 days inside the water.

Figure shows the nuclear submarines’ capacity to remain under water and traverse the area from its bases. It also shows the status of the US partnership in the region, especially in terms of long standing and emerging ones. Nuclear subs can stand on an average 81 days from its bases compared to conventional subs 23 days.

Another twist in AUKUS which brought Australia and the US close is their mutual interest of losing each other to China. China, which embargoed Australia’s trade recently, convinced Canberra that it required a powerful strategic ally in the Indo-Pacific, while Washington too realized that it was a high time to engage Canberra than leaving it to succumb to Beijing. Beijing embargoed Aussie’s trade worth billions, threatening hundreds of jobs, while there has been no response from the allies to compensate for the loss by increasing their bilateral trade.

How Beijing responded to the AUKUS

Malaysia and North Korea too have expressed their concerns towards the beginning of an ‘arms race’ in the region. North Korea termed it “extremely undesirable and dangerous acts”, warning of ‘unspecified countermeasures if it undermines its security’. The deal will “upset the strategic balance in the Asia-Pacific region”, adding that there was a risk that the move could trigger a “chain reaction of arms races”, while New Zealand, a close ally of the US, has also raised against losing the ‘nuclear free zone’.

Besides triggering a possible arms race, including nuclear, in the Indo-Pacific, there is also a strong likelihood of the violation of the NPT (Non-proliferation Treaty), making it a complete failure in its objective of checking the proliferation globally.

The US has denied the possibility of using nuclear weapons and said that the nuclear subs are chosen only to overcome the limitations of the conventional subs; however, it raises two pertinent quarries, first, “Do the nuclear subs carrying conventional weapons, are enough to deter or contain China bullying countries in the Indo-Pacific: and second, “Could Australia not be able to dodge the NPT which allows the import of high enriched uranium (HEU). Being one the largest depositors of uranium, Australia can easily trade off uranium ore with HEU from third country.

Obviously, the intelligence gathered by the nuclear subs would only be fruitful when it is deployed to deter China. Unless these nuclear subs are tipped with nuclear weapons, including nuclear missiles, China’s expansion will almost be impossible. Once the US deploys nuclear weapons, it will completely change the global attitude towards the WMD (weapon of mass destruction). Once again, obtaining nuclear capability will become a prized trophy. If the US increases nuclear pressure, its rivals won’t hesitate to develop nuclear capabilities to their allies, plunging the world to a more chaos and disorder.

The Gulf regions perhaps witness the highest flare-up. Iran, Saudi Arabia and may be Iraq and Syria, Turkey would like to have at least one nuke. China, Russia, North Korea and even Pakistan won’t be hesitant to shop their nuclear Wal-Mart. HEU may also be sold to save from the violation of NPT. What will happen to countries like Israel which have maintained their superiority on nuclear blackmailing? Falling nukes into rough hands also won’t be surprising, while none would be held answerable too.

Did the US choose a dangerous option? One section call AUKUS a face-saving attempt of President Biden after his messy Afghanistan decision, while others hardly consider it dangerous at all. If China is destabilized even half, including frustrating Beijing’s BRI project, the job is done, they think in this way too. These are really a dangerous psychology. Will China allow this to happen; will it let the nuclear cats to encircle Beijing. The Chinese foreign minister called on the Biden Admonition to “revoke the wrong decision” on AUKUS, while the Chinese too feel that Australia will relent once China opens its market for its products. The Russian experts feel that AUKUS would hardly reach to successful conclusion as neither Canberra is well experienced nor the UK and the US have enough to complete the project. The end result seems to be worse than Afghanistan and at the end both superpowers would adjust with each other after accommodating each other which may end in forming G2.

What will India and Japan get?

Right now, this is a tough question to answer, especially when both India and Japan are annoyed with tough and reluctant Beijing on the one hand and are mesmerized with the idea of muzzling China through AUKUS and Quad in the Indo-Pacific and perhaps by giving a Naval base to the US in “Andaman” in the West on the other.

So far AUKUS is a racial and all white grouping. It does not want to share technology and the platform with non-whites but lures India and Japan to give their 100% and fight their war. So expectation beyond a point will be like chasing the mirage. Regarding Quad, its identity and original purpose seems to be diluted. It is now more like a social, economic and humanitarian grouping; and soon more countries are likely to be included. Quad is more likely to emerge as the BRICS to be led by the AUKUS members, while India and Japan would be added incentives of providing big economic markets.

Japan has a precedent of fighting the US war against Soviet Russia during the Cold War, while India is a new player in the game. This raises some pertinent questions especially to those arguing India should join the anti-China club.
Should India give 100% to Quad: While the US’ narratives do not match with India’s, particularly on its western border, question arises how much India give in Indo-Pacific. India’s immediate concerns are Taliban, Pakistan, China and the BRI and CEPC passing through its territory and challenging its sovereignty and integrity.

Washington views the Taliban and Pakistan differently. It’s an open secret that the US allowed the smooth power transition in Kabul, allowing Talibans to take over so easily, while New Delhi considers the coming of Talibans to power detrimental to its national security and regional peace.

Similarly, Washington also differs with New Delhi over Pakistan. India’s tilt towards Washington has driven Russia away. New Delhi is paying the price of losing Moscow to Islamabad, while Islamabad’s close nexus between Beijing further weakens New Delhi’s position in the region. Although apparently, the US assures India, the price Washington is asking for such as a “base at Andaman” seems too high and risky for New Delhi. Giving a base in Andaman to the US is just short of sending troops to Afghanistan and Iraq which India did accept despite so much pressure. In exchange of Andaman, will the US consider of giving India what it wants –high end technology, inclusion in AUKUS and unfettered access to the US market?

I. The US has set the delivery date of the nuclear submarine 2040. It means the Indo-Pacific region would remain under a tense arms race throughout the period. How the ASEAN countries would respond to such prolonged tension which obliges their growth and prosperity to 20 years of peace and stability in the region, is not easy to predict.

II. What would be the role of Russia? Will Moscow remain a mute spectator and wait for its own turn, while Beijing is gradually being surrounded by nuclear cats?

III. What repercussions will the submarine fiasco bring on European security and its willingness to cooperate with Quad and what the Quad would look like without the EU?

IV. Will the EU choose to deprive itself from Chinese economic bonanza by fully going with the US, especially when Washington has shifted its attention and resources to the Indo-Pacific and more importantly, why does the EU likely go with Washington when their interests are neither common nor carries equal respect and dignity? The non-Markel government at Bonn will again be a twist in EU politics.

V. Will France, which is an important country in EU security, cooperate with Quad or prefer equi-balancing between Washington and Beijing in Indo-Pacific? France has its own stakes in Pacific region.

VI. Will it be too much thinking that the future Quad will be more like the New BRICS and AUKUS the SCO in Asia manned by the Western powers? The objective seems to be setting up parallel platforms to China and Russia.

The author is a Delhi-based political economist.