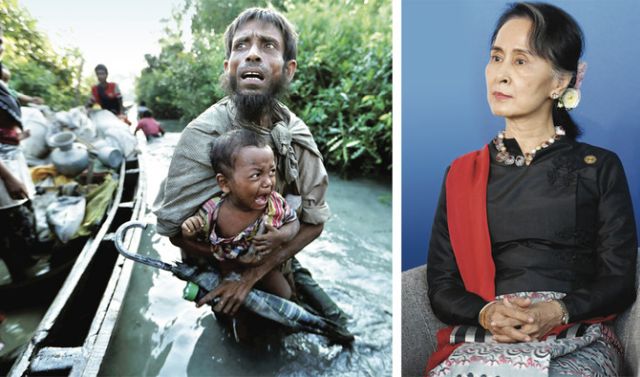 Since ascending to the office of State Counsellor, Aung San Suu Kyi has drawn criticism from many countries, organisations and figures over her inaction to the persecution of the Rohingya people in Rakhine State and refusal to accept that Myanmar’s military has committed massacres.Under her leadership, Myanmar has also drawn international criticism for prosecutions of journalists.

The Amnesty International has withdrawn its highest honour from  Aung San Suu Kyi for overlooking and excusing the brutal oppression against Rohingyas in her country and shielding the military from international scrutiny for the crimes against humanity.

Nine years ago, Amnesty International had recognized her with its highest honour, the Ambassador of Conscience award.

“When we presented you the award, you clearly stood as “a symbol of hope, courage and the undying defence of human rights, not only to the people of Myanmar but to people around the world. As an Amnesty International Ambassador of Conscience, our expectation was that you would continue to use your moral authority to speak out against injustice wherever you saw it, not least within Myanmar itself,” wrote Amnesty International’s Secretary General Kumi Naidoo in a letter to the Myanmar leader on Sunday.

“Instead, we are deeply alarmed and disappointed by your clear and consistent betrayal of the very values you promoted for decades. You have chosen to overlook and excuse the brutal oppression and crimes against humanity committed by the military against the Rohingya and against minorities in Kachin and northern Shan States, and your office has actively shielded the military from international scrutiny and accountability,” he said.

As State Counsellor, Minister of Foreign Affairs and Minister of the Office of the President, Aung San Suu Kyi is the de facto leader of Myanmar’s civilian-led government since April 2016.

“We have also been appalled to witness your administration spread hate narratives against minorities, fostering rather than challenging discrimination and hostility. As an organization which campaigned tirelessly for your release – and the release of all prisoners of conscience in Myanmar – we are dismayed that your government has not only failed to repeal or amend repressive laws but has actively used them to curb freedom of expression, and arrest and imprison human rights defenders, journalists and other peaceful activists.”

“Today, we are profoundly dismayed that you no longer represent a symbol of hope, courage, and the undying defence of human rights. Amnesty International cannot justify your continued status as a recipient of the Ambassador of Conscience award and so with great sadness we are hereby withdrawing it from you,” the Amnesty said.

“During the campaign of violence unleashed against the Rohingya last year the Myanmar security forces killed thousands, raped women and girls, detained and tortured men and boys, and burned hundreds of homes and villages to the ground. More than 720,000 Rohingya fled to Bangladesh. A UN report has called for senior military officials to be investigated and prosecuted for the crime of genocide,” Amnesty said.

The youngest daughter of Aung San, Father of the Nation of modern-day Myanmar, and Khin Kyi, Aung San Suu Kyi was born in Rangoon, British Burma. After graduating from the University of Delhi in 1964 and the University of Oxford in 1968, she worked at the United Nations for three years. She married Michael Aris in 1972, with whom she had two children.

Aung San Suu Kyi rose to prominence in the 1988 Uprisings, and became the General Secretary of the National League for Democracy (NLD), which she had newly formed with the help of several retired army officials who criticized the military junta. In the 1990 elections, NLD won 81% of the seats in Parliament, but the results were nullified, as the military refused to hand over power, resulting in an international outcry. She had, however, already been detained under house arrest before the elections. She remained under house arrest for almost 15 of the 21 years from 1989 to 2010, becoming one of the world’s most prominent political prisoners.

Her party boycotted the 2010 elections, resulting in a decisive victory for the military-backed Union Solidarity and Development Party. Aung San Suu Kyi became a Pyithu Hluttaw MP while her party won 43 of the 45 vacant seats in the 2012 by-elections. In the 2015 elections, her party won a landslide victory, taking 86% of the seats in the Assembly of the Union – well more than the 67 percent supermajority needed to ensure that its preferred candidates were elected President and Second Vice President in the Presidential Electoral College. Although she was prohibited from becoming the President due to a clause in the constitution – her late husband and children are foreign citizens – she assumed the newly created role of State Counsellor, a role akin to a Prime Minister or a head of government. Aung San Suu Kyi’s honours include the Nobel Peace Prize, which she won in 1991. Time Magazine named her one of the “Children of Gandhi” and his spiritual heir to non-violence.