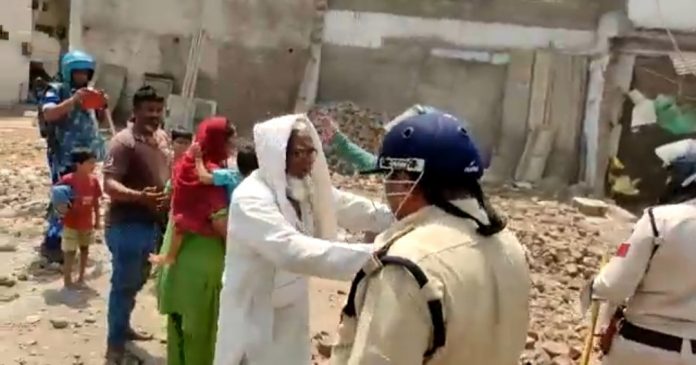 Amidst the prevailing anti-Muslim violence triggered by the rallies of right-wing groups during the Ram Navami procession in almost four states of India, Madhya Pradesh’s Khargone, authorities have allegedly begun demolishing homes, shops and other properties belonging to Muslims today in Chandini Chowk and Khaskhaswadi Mohalla area.

Visuals of bulldozing and razing down houses with police escorts have been widely shared on Social media.

The demolition drive was conducted a day after the Hindutva goons attacked and demolished the homes, shops and other religious properties of  Muslims in the area.

“The culprits have registered fake FIRs and now in its guise, the authorities targeted the Muslims, especially those who stood against the atrocities, including activists, and demolished their homes, buldozed their shops, and other important properties,” Zaid Pathan told Muslim Mirror, who is the an activist and loacal community leader.

According to the locals, Hindu devotees barged forcefully into the Muslim areas of Khargone, Khandwa and many other places yesterday, damaged their properties, doused their homes, shops and Mosques, hurled petrol bombs in the areas in the presence of police authorities.

“The culprits are free but Muslims are being arrested and their homes are being demolished,” said another local resident who wished to be anonymous.

“After today’s drive it is evident that the culprits have the full support of authorities,” he added.

“The politicians are busy reacting on Twitter and blaming Muslims for nothing but no one actually knows what poor Muslims are facing on the ground,” Zaid said.

Another activist, Sami Khan who works with the Companions of Peace Industries, an organisation that works for the betterment of Minorities in India, said that the riots against Muslims were all pre-planned when the infamous leader of BJP Kapil Mishra shouted Provocative slogans against Muslims like musalmanu ke gharu mein aag lagaayeinge (we will burn homes of Muslims) at an event at Khargone and this is the fallout of that event.

Muslim Mirror learnt from the local sources that yesterday amid the clashes and violence a teenage boy, Shahid Khan of Aman Nagar Khargone was hit by a bullet in the back when was going tothe  Mosque for Iftaar. He is right now undergoing treatment at a private hospital with the help of local community leaders and youth.

Muslim Mirror tried to contact the Indore police in this matter but they did not respond to the queries and calls.