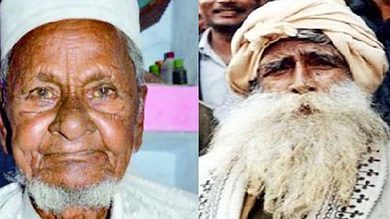 Ayodhya : They were sworn enemies in court and friends outside it. Even as Ayodhya makes a conscious effort to forget the Babri battle, it continues to celebrate the friendship between the two litigants in the Babri case – Hashim Ansari and Mahant Ramchandra Paramhans.

The two bitterly fought the case in court, but the moment they stepped out they were thick friends.

Mahant Ramchandra Paramhans, the chief trustee of the Ram Janambhoomi Nyas, died in 2003 while Hashim Ansari, the oldest litigant in the case, died in 2016.

Hashim Ansari was among those arrested in 1949 when the idols allegedly emerged in the mosque. He was the main plaintiff when the Sunni Waqf Board filed the Ayodhya title suit in 1961. He repaired cycles for a living.

Paramhans, one of the pioneers of the Ayodhya movement, had filed a petition in Faizabad court in March 1950 seeking the right to protect the idol.

Vivek Kumar Srivastava, a senior lawyer in Faizabad court, recalls, “My father, also a lawyer, used to cite the example of these two when it came to friendship. He used to tell us that Ansari and Paramhans would even share a cup of tea in the court premises if the hearing was delayed. Other people in the court premises used to be shocked to see their camaraderie – more so, because of the case they were contesting.”

After the court hearing, they would come to Dant Dhawan Kund and chat while playing cards.

“On the 25th anniversary of the demolition, we recall the relationship that these two men shared. When the Mahant died, Hashim wept bitterly at the loss of a friend and remained by his side till the last rites were performed. The tears were genuine – just like their friendship. I am sure the two must have come together in the sky above,” says Acharya Pradeep Tiwari, a local priest. — IANS