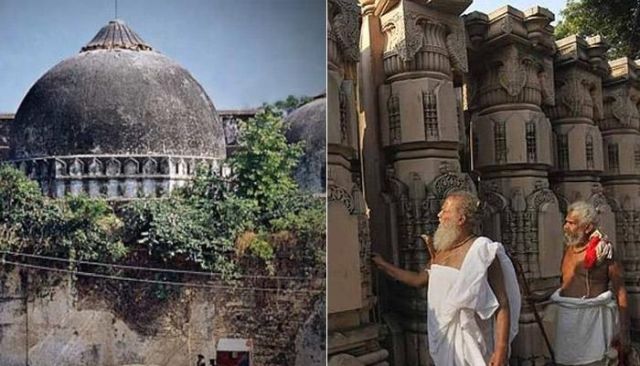 New Delhi : The Supreme Court on Wednesday said that the parties to the Ramjanmabhoomi-Babri Masjid dispute were free to settle the contentious issue between themselves but it will not ask them take it as a way forward except for deciding the title issue.

A bench of Chief Justice Dipak Misra, Justice Ashok Bhushan and Justice S. Abdul Nazeer said this as a number of applicants including the resident of Ayodhya and Faizabad urged to court to ask parties to the dispute – Sunni Wakf Board and Nirmohi Akhara – to arrive at a compromise.

“You say that they must compromise, how can we issue notice on it,” said Justice Bhushan, making it clear that it was for the parties to settle the issue but as far the court was concerned it would not get into it except for deciding the title suit.

The court also said this to former Union Minister Arif Mohammad Khan who told the court that two professors of MIT Pune have drawn a plan to convert the disputed site into a place of worship for all religions and teaching of their spiritual tenets.

“If anybody is a professor or academician, he can speak to both the parties and if he succeeds, then he can approach us,” Chief Justice Misra said declining the plea for court exercising its extra-ordinary power. “Inherent power must not grow up to this. It has its own limitation,” he noted.

Rejecting about 20 intervention applications including by BJP MP Subramanian Swamy, 32 eminent people including Shyam Benegal, Aparna Sen, Anil Dharkar, Teesta Setalvad and others, the court said that it would hear only those parties which were before the Allahabad High Court.

However, later the court revived the writ petition by Swamy saying that it would be listed before an appropriate bench. Swamy told the court that his contention is that the right of the worshipers is on a higher pedestal than the parties to the dispute to title suit.

Having rejected all the intervention applicants, the court asked senior counsel Rajeev Dhavan to address it on his plea that all the petitions should be heard by a larger five judge constitution bench.

“Address us on the question whether these appeals needs to be referred to the five judge constitution bench. First we will decided that and then proceed further,” CJI Misra said recalling an earlier submission by Dhavan.

As the other side representing Ramlala and Nirmohi Akhara resisted the plea to refer the matter to five judge bench, he said: “We have to be persuaded that principle emerging from an earlier five judged bench needs reconsideration.”

Addressing the bench, Dhavan, appearing for lead petitioner M. Siddiqui represented by his legal heirs, picked holes in 1994 top court judgment which, in one of its paragraphs, had said that mosques were not an integral part of religious practice of offering prayers.

He said that the question to be decided by the court is acewhat is the meaning of mosque to the Muslims” and “Do you take it as a gospel that a mosque is not essential to Muslims and Islam”.

Assailing the principle emerging from 1994 judgment, Dhavan said that if this position was to be accepted then except for Makkah, Madinah and Dome of the Rock in Jerusalem, rest of the mosques will be of no consequence to the Muslims.

“We can’t have a narrow view of the essential and integral practices of Islam, otherwise we would deprive (the Constitution’s) Article 25 – guaranteeing freedom of conscience – of its soul,” he said.

The court was told this in the course of the hearing of a batch of cross petitions challenging 2010 Allahabad High Court verdict that had divided the disputed Babri Masjid-Ramjanmabhoomi 2.77 acres site between the Nirmohi Akhara, Lord Ram deity and the Sunni Waqf Board.

The next hearing is on March 23 when Dhavan will continue his arguments.