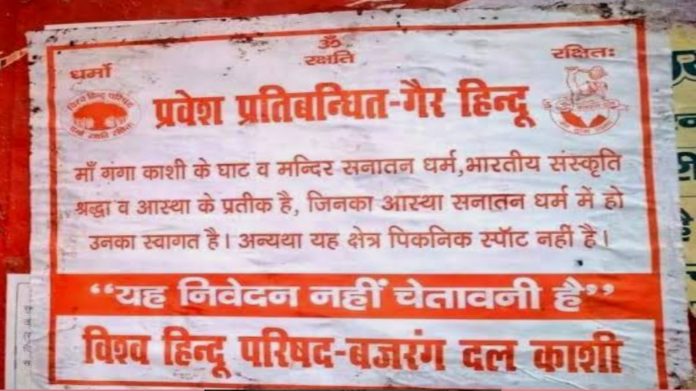 VARANASI:  Two Bajrang Dal leaders were arrested by the Varanasi police for displaying posters with a message that “Only Hindus should visit ghats along the river Ganga”.

The two, identified as Rajan Gupta and Nikhil Tripathi were later released on submission of personal bonds of Rs 5 lakh each.

Commissioner of police A. Satish Ganesh said that two persons, who were seen in the photos while pasting posters at ghats, were issued notices under 107/16 of CrPC for breaching peace.

“Both of them were brought to the ACP court in police lines, where they furnished personal bonds of Rs 5 lakh each, after which they were released,” he added.

On January 6, these VHP and Bajrang Dal activists pasted a number of posters banning the entry of non-Hindus on the Ghats.

The posters contained a message that “those who treat the ghats of the Ganga as picnic spots should stay away from ghats of Maa Ganga, as it is a symbol of Sanatan culture.”

The posters said that they welcome those who show respect to Sanatan dharma.

These posters were resented by many groups, including Congress leaders and Sajha Sanskriti Manch, who termed it a bid to disturb communal harmony and peace. -IANS