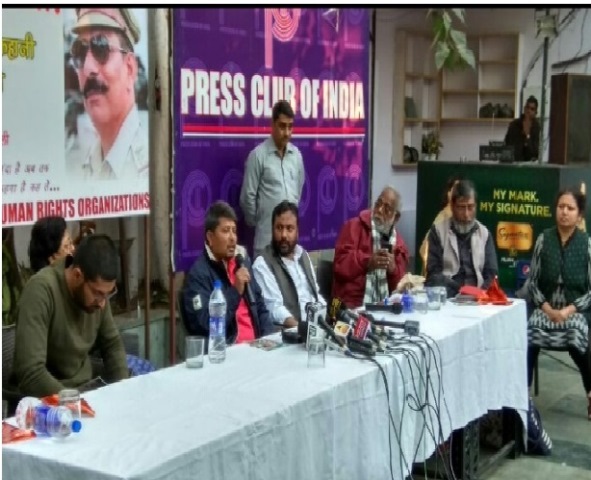 New Delhi: A six-member fact-finding team revealed that the BulandShahar violence was apre-planned conspiracy intended to kill two birds with one stone hatched by the BJP affiliates outfits Bajrang Dal and Yuva Morcha.  Releasing the report today at the Press Club of India here,National Confederation of Humans Rights Organisation (NCHRO), a civil and human rights body comprising journalists and activists, demanded that a Supreme Court monitored special investigation team must probe the violence incident of December 3 in Bulandshahr, Uttar Pradesh in which Hindutva extremists allegedly shot dead a police inspector and a youth.  It also underlined that the team did not find any traces of cow-slaughtering at the spot which made it amply clear that the mob violence and murder of Inspector Subodh were aimed to create an atmosphere of fear in the Muslim community.

The team visited to all spots connected with the incidents, spoke to all concerned people and came to the conclusion that it was “a planted incident to create unrest in the area and elsewhere in the name of cow and in the wake of the large religious gathering ‘Iztema’ that was held at the distance of 50 kilometer from the spot.”

The report stated that Hindutva outfits were behind the incident and that they wanted to polarize the voters of recently concluded assembly elections. The NCHRO named two BJP youth leaders for instigating the mob.

“Despite the police, particularly, Inspector Subodh Kumar Singh, the officer on duty took all the measures to avoid the violence and assured to take action immediately still the mob, at the instigation of local Bajrang Dal and BJP Yuva Morcha leaders Yogesh Raj and Shikhar Agrawal gathered at the Chingawati police post and burnt down many vehicles, staged a shootout and pelted stones on the police force.”

Team member and senior journalist Kiran Shaheen told reports that the FIR filed by Yogesh Raj has even named two minors for the cow slaughter that shows his intention behind the violence.

NCHRO secretary Advocate Ansar Indori said the mob-attacks on Police force and setting ablaze a police station in the presence of the heavy security proves that it was a “planned affair”.

Another team member Manoj Singh said the December 3rd incident was a targeted attempt by Sangh organizations to instill fear in the Muslim community. According to the facts, small skirmishes between local groups were used as an excuse to start communal clashes.

The report also suggested that way in which the video of Inspector Subodh Kumar’s murder was shot clearly indicates that the Hindutva mob received political protection from the Yogi-Modi government. “They have been emboldened to kill even police officers openly’. The current environment is such that even the police force, which is supposed to protect the common man, is not safe.”

On the occasion, slain inspector Subodh Kumar’s son Shreeye Partap Singh asked why the accused persons have not joined probe and on the run.  “Why is Yogesh Raj absconding and releasing videos to claim innocence. This testifies to his involvement. If he is clean he should surrender himself to the police and join the probe,” he said. He added that on the day his father went to the spot, initially the situation was under control and the matter was resolved by around 10.30 am on December 3.

He also questioned local BJP MLA’s statement who said the inspector had shot himself.

“According to the post mortem report my father was shot from a distance of 6-7 metres. How can someone shoot himself from that distance? I am satisfied with the police probe so far. I can’t say if there is any political pressure on police,” he said.

Some members of Muslim families also addressed the media  alleging that the police unleashed a reign of terror by arresting innocent persons despite knowing that killing of cows was a conspiracy.

The report quoted police personnelVijay Kumar as saying:”After inspecting the spot, we can say it is not a case of cow slaughtering, but it seems that the cow’s carcasses were brought there a few days ago. It appears to be a conspiracy.”

The locals andother villagers including women also see it is a clear conspiracy.

The report stated that “Nayabans is the village of the main accused Yogesh Raj where 400 to 500 Hindu families and 125 to 150 Muslim families live.  FIR for cow slaughtering is of those who live in or belong to Nayabans. Muslim families said that an atmosphere of fear is being built in this peaceful village after the Yogi Govt came to power. Many people led by Yogesh Raj have been threatening and harassing Muslim families.Yogesh Raj is the man who removed the mike from the village mosque and tried to occupy the old graveyard land with the help of Hindutva outfits.”

The report also mentioned that “all the farmers of four villages had harvested sugarcanes 15 days earlier, so that the land could be available for the ijtema. Accommodations for the devotees were being built 8 or 10 days before the ijtema. Everyone was involved in these preparations- regardless being a Hindu or a Muslim. Every Hindu farmer’s house even temples were opened for namaz.  Probably, the Sanghis and Bajrangis could not tolerate this feeling of harmony and mutual respect but they failed in their conspiracy to end this feeling.”

The fact finding team made demands including that SIT should investigate the case under the supervision of Supreme Court; impose immediate ban on armed forces which aim at a civil war throughout the country in the name of cow; pass a strict law to stop mob lynching immediately and a  law should be enacted to put the responsibility on the states in cases of communal unrest