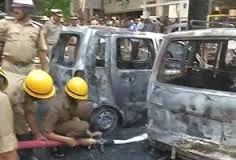 Chennai, April 23: Three suspects have been taken into custody by the Karnataka Police from Tamil Nadu in connection with the April 17 Bangalore bomb blast that left 16 people injured, police said Tuesday.

According to police, Kichan Bukari was taken into custody in Madurai Tuesday while two persons – Peer Mohideen and Basheer – were arrested here late Monday night.

A special police team from Karnataka had arrested Mohideen and Basheer from a lodge here, with the assistance of the Tamil Nadu Police. The duo were tracked on the basis of their mobile phone call records.

The three are being taken to Karnataka for interrogation, said sources.