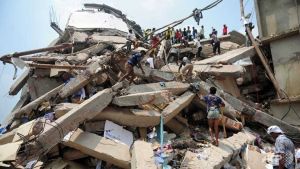 Dhaka, May 5 : The toll in the building collapse on the outskirts of Bangladesh capital Dhaka has swelled to nearly 600, authorities said Sunday, even as rescuers continued removing concrete slabs and debris 12 days after the industrial tragedy.

Hoping to find their missing loved ones, many people were seen around the scene of the collapse and visiting nearby hospitals and a school ground where the bodies have been kept for identification, Xinhua reported.

With the fresh recovery of nearly two dozen more bodies Sunday, Deputy Commissioner or Administrative Chief of Dhaka district Sheikh Yusuf Harun said “the death toll of the building collapse has risen to 588 till Sunday afternoon”.

Defying the stench of decaying bodies which filled the air around the ruins of the building, rescuers were seen continuing their relentless efforts to pull out manually many more bodies which were spotted Sunday.

“The rescue operation will continue until the recovery of the last body,” Harun said, adding he had no information on missing workers since the building collapsed.

Rescue workers said some bodies had deteriorated so much that they even found bones without flesh, media reports said.

However, rescuers continued their efforts to search for more people, believed still trapped under the rubble of the Rana Plaza building that crumbled April 24 morning.

Following the cracks detected just a day before the disaster, the workers were evacuated and garments authorities declared a leave for April 23. But none has bothered about the cracks when officials of the factories in the building forced the workers to join workplaces the next morning.

Six floors of the building housed the five garment factories which, according to the months-old data of the owners’ association, employed nearly 3,122 workers, mostly women.

There were hundreds of shops inside the building and a bank branch.

Rescuers have pulled alive more than 2,437 people after the eight-storey building collapsed.—IANS.