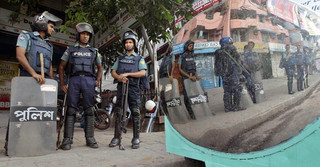 New Delhi, April 11 : After honoring prominent Indians for their help in the 1971 war of liberation, Bangladesh would also like to acknowledge the contribution Indian soldiers who were killed fighting Pakistani forces in the war, Bangladesh Information and Broadcasting Minister Hasanul Haq Inu said here Thursday.

Inu said he had discussed with his Indian counterpart Manish Tewari Thursday how Bangladesh could acknowledge the contribution of the Indian soldiers killed.

“I asked Minister Tewari if India can give us the names of the 8,000 Indian soldiers who died, so that the Bangladesh government can send to their families a certificate of recognition of their contribution,” said Inu, addressing a conference at the Jamia Millia Islamia.

“The 8,000 Indian soldiers who laid down their lives for the liberation struggle of Bangladesh have almost been forgotten.. I don’t want to forget,” said Inu who was closely involved in the war along with Bangladesh founder Sheikh Mujibur Rahman.

Bangladesh is also examining the possibility of jointly making a film with India on the liberation war, said the minister. He has discussed the possibility during his meeting with Tewari.

“This will need extensive research… Scholars from both countries can put their heads together and come up with a script,” said Inu.

In March, Bangladesh posthumously honoured Lt. Gen. Jagjit Singh Aurora and former West Bengal chief minister Jyoti Basu among other Indians for their contribution to the 1971 war at a ceremony in Dhaka.

Aurora was the General Officer Commanding-in-Chief of Indian Army’s Eastern Command and had accepted the surrender of 95,000 Pakistani soldiers from Pakistani commander Lt. Gen. A.A.K. Niazi at a historic ceremony in Dhaka on Dec 16, 1971.

Indian President Pranab Mukherjee was also awarded during his visit to Dhaka in early March for his contribution to the liberation war.—IANS.