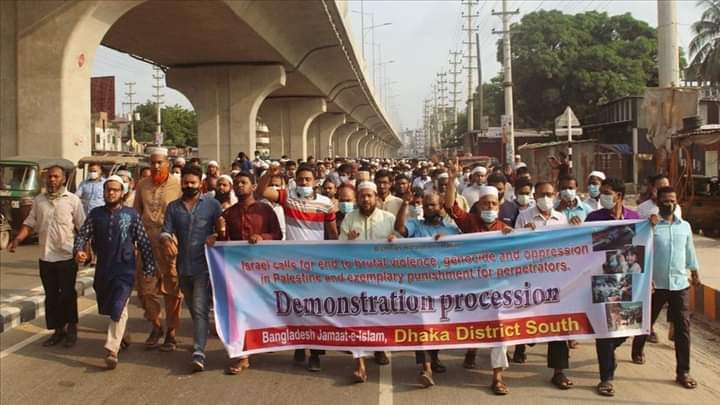 At least 212 Palestinians, including women and children, have so far been killed in Israeli airstrikes preceded by days of tension in occupied East Jerusalem, where hundreds of Palestinians were assaulted by Israeli forces at Al-Aqsa Mosque and in the Sheikh Jarrah neighborhood.

While party workers and supporters chanted anti-Israel slogans, leaders called on the international community as well as Muslim leaders to make joint efforts to stop the Israeli atrocities.

“Israeli Zionist forces are mercilessly murdering Palestinian people of all ages, including children and women,” party chief Shafiqur Rahman told Anadolu Agency. “Let us extend our helping hand to the oppressed Palestinians. Let us make a promise to remain by their side for protecting and safeguarding the sanctity of the holy Al-Aqsa Mosque.”

Bangladesh, a Muslim majority South Asian nation with no diplomatic ties with Israel, has frequently raised voice on different world platforms in support of the legitimate struggle of Palestinians.