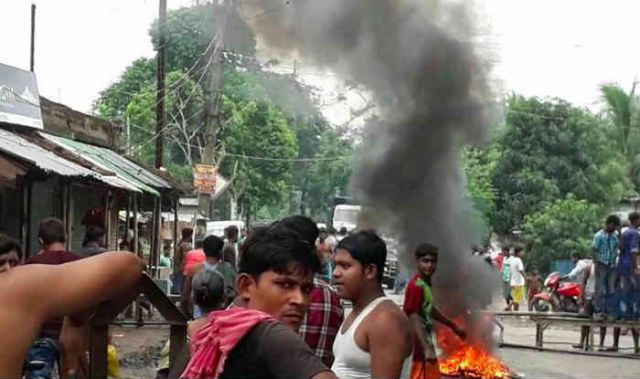 Basirhat (West Bengal) : Basirhat, the sub-division in West Bengal’s North 24 Parganas district that witnessed communal tension in July, is now doing its best to leave behind those days of agony and soak in the infectious Durga puja spirit — but apprehensions remain.

Days before the start of the biggest annual carnival in this part of the world, the streets of Basirhat bore a festive look with half-done marquees, decked-up shops and banners on both sides welcoming the Goddess on September 26 for the five-day Puja.

Though a section of locals spoke of a sense of apprehension and fear that still prevailed among both Hindus and Muslims, the major Puja organisers of Basirhat were upbeat that people would celebrate the festival together as in previous years.

Pockets of Basirhat, nearly 75 kilometres from Kolkata, turned volatile two months back over an objectionable Facebook post by a teenager in the sub-division’s Baduria area.

Though the offender was arrested, tension quickly spread to Basirhat town, Swarupnagar and Deganga as hardliners from both communities took out rallies, obstructed the movement of trains and resorted to vandalism and violence, forcing the state government to issue prohibitory orders and deploy central forces in the area.

The Pragati Sangha Puja Committee, a kilometre away from Moilakhola, the epicentre of the violence in Basirhat town, said preparations were on in full swing despite a sense of anxiety among people of both communities.

“The Hindus and Muslims of Basirhat have been living together for decades. None of us want confrontation. Though this is a predominantly Hindu locality, the Muslim families living here often participate in Durga Puja celebrations. Some of them are even part of our Puja committee this year,” Secretary Montu Saha told IANS.

Basirhat’s Trimoni — with a mixed population — was one of the areas worst affected by the violence. The roads still bear marks of burnt tyres at several places, and damaged hoardings and broken windowpanes of shops are rude reminders of the week-long July madness.

A picture in contrast is the 73-year-old Puja of Prantik Club in Trimoni. There were no signs of any old scars as nearly 50 labourers, most of them Muslim, worked at a frantic pace to erect the marquee, themed as a palace.

Puja committee Secretary Bholanath Maitra said they are celebrating the rise of women’s power and have plans to hold a post-festival gathering (Vijaya Sammilani) with people from all communities.

Arshad Ali Mollah, a member of a local Puja committee, felt the festival is no longer the sole preserve of Hindus, but is rather seen as a cross-community event. He said many Muslims like him in Basirhat not only enjoy the festivity but also take active part in organising the carnival.

“A huge crowd comes from outside every year to see the Puja celebrations in Basirhat. Over 30-35 percent of the crowd comprises Muslims. During the four days when the puja is at its peak, many people from our community volunteer to maintain the queues and help the organisers. I do that myself,” Mollah told IANS.

“Also, during the immersion ceremony in the Ichamati River (on the India-Bangladesh border) here, the boatmen who take the idols to the river are predominantly Muslims. They too eagerly wait for Durga Puja as it helps them earn a livelihood,” he said, adding that the communal hostility is behind them.

Echoing Mollah, Biswajit Halder, Puja organiser at Basirhat Recreational Club, said the situation was now under control and it was unlikely that things would turn ugly again during Durga Puja or Muharram as both the communities wanted to co-exist in peace.

The local MLA, Dipendu Biswas, who heads one of the Puja organising committees, claimed the communal tension in the region was fuelled by miscreants from outside.

“The people of Basirhat are united. They have erased the memory of the untoward incidents from their minds. I’m sure the people would put their best foot forward to preserve the century-old heritage of Basirhat during the Pujas,” the footballer-turned-Trinamool Congress leader, said.

But he also warned trouble-mongers that the administration would take “strict action” if there was any breach of peace.

The police have already organised several rounds of meetings with all the prominent Puja organisers to discuss security measures and encouraged people to celebrate festivals of all communities with equal enthusiasm.

“Like every year, we have organised several meetings with all the major Puja committees. There should not be any renewed discord among us,” said a senior officer at the Basirhat police station.

He said patrolling and surveillance through CCTV cameras at several strategic points have been increased to avoid any untoward incident. The organisers have also been asked to install CCTV cameras within the marquees.

(Milinda Ghosh Roy can be contacted at milinda.r@ians.in)