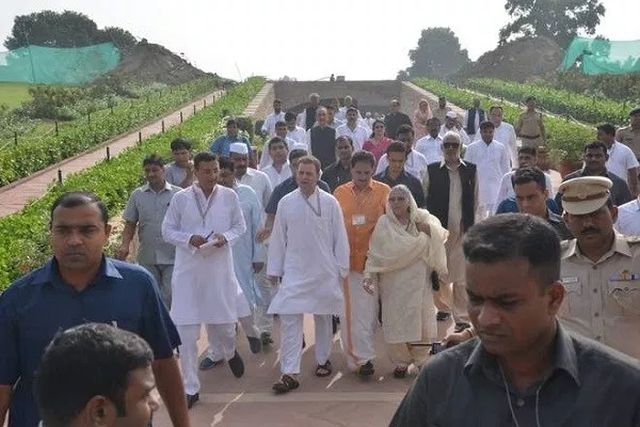 New Delhi : The Bharat Bandh called by the Congress and Left on Monday against rising fuel prices and tumbling rupee evoked mixed response in the country as the opposition closed its ranks against the Modi government. The BJP dubbed the protest a failure.

But it was mostly ineffective in Mamata Banerjee-ruled West Bengal.

Shutdown enforcers resorted to blocking roads and rail tracks disrupting traffic in several parts of the country. In Bihar, a critically ill two-year-old girl died on her way to a hospital in Jehanabad town apparently due to a road blockade.

Bandh supporters allegedly resorted to violence and clashed with the police in some parts areas, prompting the ruling BJP, which dubbed the shutdown a “complete failure”, of accusing the Congress of creating an “environment of fear” by violently enforcing the shutdown.

Normal life was paralysed in Odisha with vehicular movement and train services thrown out of gear as Congress workers blocked roads and trains. Hundreds of Congress activists were arrested. The Railways cancelled 12 trains while schools and colleges were closed.

Hundreds of Congress and other opposition parties leaders and workers took to the streets. Shutdown supporters blocked national and state highways, disrupted rail and road traffic for hours and stranding thousands of passengers.

Demonstrators clashed with police in several places while dozens of vehicles in Patna were damaged.

In Karnataka, normal life was affected as public transport kept off the roads across the state. Schools and colleges were closed although state and central government offices remained open. Global software firms like Infosys and Wipro functioned normally.

Life was thrown out of gear in BJP-ruled Tripura with most markets, shops and business establishments closed and private and passenger vehicles off the roads. Government offices and some banks were open but employee attendance was low.

But the Bharatiya Janata Party claimed that Bandh was a failure in Tripura.

In flood-ravaged Left-ruled Kerala, public vehicles went off the roads but private vehicles plied in many places. Shops, markets and establishments were shut.

In Telangana and Andhra Pradesh, bus services were affected and many private educational institutions remained closed.

There was a mixed response in Prime Minister Narendra Modi’s home state Gujarat, where a large number of educational institutions were shut while many vehicles remain off the roads.

In Maharashtra, the shutdown elicited mixed response in urban centres but secured widespread support in the semi-urban and rural hinterland which have been severely hit by the fuel prices and its cascading effects.

In Mumbai and other cities, large numbers took to the streets, railway stations, bus depots, and other public places. But suburban trains, BEST buses, schools and colleges functioned normally. Shops and commercial establishments downed shutters in many localities.

The shutdown was mostly ineffective in West Bengal. Banks, educational institutions in Kolkata were mostly open while trading activities in the city were more or less normal.

The ruling Trinamool Congress supported the issues on which the shutdown was called but opposed the strike in line with its stated anti-strike policy.

Meanwhile, in the national capital, Congress President Rahul Gandhi led the opposition’s show of strength, staging a foot march in support of the Bharat Bandh from Rajghat to Ramlila Maidan in the heart of the city.

Manmohan Singh hit out at the BJP for “miserably” failing to control fuel prices.

The Left parties took out a separate rally in the national capital.

Meanwhile, the BJP said the hike in fuel prices was a “momentary difficulty” and claimed the shutdown was a complete failure.

“Bharat Bandh has been unsuccessful. We condemn the violence being used to instil fear among citizens across the country,” Law Minister Ravi Shankar Prasad said.

Bring down BJP to bring down prices: Akhilesh Yadav