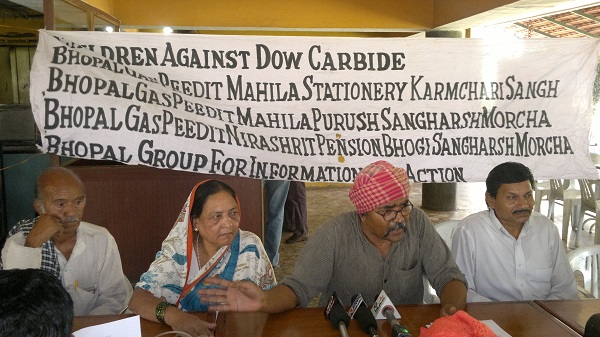 Bhopal, April 17: Representatives of five NGOs (non-government organisations) working for the welfare of the survivors of 1984 Bhopal gas tragedy, the world’s worst industrial catastrophe, have accused the Government of India of kowtowing to US Government pressure to serve the interests of Union Carbide and Dow Chemical in Bhopal.

A cable sent by Deputy Chief of Mission in New Delhi Steven J White on July 27, 2007 says: “During the CEO forum event in October 2006, GOI officials including Commerce Minister Kamal Nath and Planning Commission Deputy Chairman Montek Singh Ahluwalia stated that they welcomed further Dow investment in India and did not believe that Dow was responsible for the disaster site clean-up.”

The US Ambassador David Mulford is reported to be urging the Government of India to “drop its claims against Dow” in a cable sent on September 18, 2007. In reply Ahluwalia assures the Ambassador that the Government of India does not hold Dow responsible for the clean-up but is unable to withdraw its claims against Dow because of “active and vocal” NGOs.  According to the cable Ahluwalia then advised the Ambassador to discuss the issue of Dow Chemical’s Bhopal liabilities with Finance Minister Chidambaram.

The organizations stated that a cable sent by Deputy Chief of Mission David T. Schneider from the US Embassy in New Delhi on February 4, 1975 shows that the Government of India allowed Union Carbide, USA to bypass the Foreign Exchange Regulation Act and obtain loans from American Exim Bank instead of an Indian financing agency.  Another cable of September 11, 1975 from US Secretary of State Henry Kissinger to the US Embassy in India shows the support the US government gave to Union Carbide, USA in securing loans from the US Exim Bank for its Bhopal operations.

The organizations presented copy of a cable sent by the then US Ambassador in India William Saxbe on April 20, 1976 that expresses satisfaction at the dilution of FERA guidelines so that Union Carbide can continue to hold majority stakes in its Indian subsidiary.

The representatives of five organizations – Bhopal Gas Peedit Mahila Stationery Karmchari Sangh, Bhopal Gas Peedit Mahila Purush Sangharsh Morcha, Bhopal Gas Peedit Nirashrit Pensionbhogi Sangharsh Morcha, Children against Dow/Carbide and Bhopal Group for Information & Action stated that the Wikileaks documents highlight the historical roots of the continuing injustice in the case of the world’s worst industrial disaster in Bhopal. They said that the injustice in Bhopal is being perpetuated by the support of the US and Indian government to Union Carbide and Dow Chemical as well as that by traitors such as Kamal Nath, Chidambaram and Ahluwalia.

Meanwhile, the details of the extracts from Wikileaks are as follows:-

Extract: AS SEEN FROM THE GOI POINT OF VIEW THE ISSUE IS ONE OF PRINCIPLE AND IT HAS ALREADY AGREED TO COMPROMISES NOT USUALLY AVAIL- ABLE TO INDIAN BORROWERS

Extract: We are trying to take advantage of the opening provided by Kaul’s interest in solving economic problems by asking for finance action to resolve a large variety of problems such as the fertilizer arbitration case, remittance delays, Pan Am and TWA problems and pending investment proposals such as Union Carbide and national starch as well as an easing of the more onerous FERA guidelines. (as this cable was being prepared union carbide telephoned to say that its proposal had been suddenly approved after 6 months of waiting.) we hope to get more results. The “success stories” so far relate to GOI movement on the north Vietnam problem, a noticeable easing of “fly Indian” restrictions on Indians travelling on USG programs and union carbide.

From: Department of State, United States of America India

To: US Embassy, New Delhi

Extract: The Export-Import Bank of the United States has authorized a direct credit of dol1,260,000 to Union Carbide India Limited (UCIL), to support a dol2.8 million sale of US equipment and services required for the construction of a plant to produce insecticides and other agricultural chemicals. The plant will be built at Bhopal, Madhya Pradesh, for the production of methyl-isocyanate based pesticides. us purchases will include reactors, distillation towers, heat unclassified un-classified page 02 state 001679 exchangers, centrifuges, filters, dryers, valves, control instrumentation, safety equipment. us suppliers will include Vulcan manufacturing company of Cincinnati, Ohio, and Gould pumps inc., of Seneca fall, New York, among others.

Extract: the earlier guidelines had created problems for the goi in dealing with the cases of multi-product companies such as union carbide, phillips of the netherlands, imperial chemical industries and other whose contribution to indian industrial development and exports was vital but who could not match the strict criteria under the old guidelines and, at the same time, were unwilling to come down to a 40 percent foreign equity position. foreign capital is now assured of a reasonable chance to retain majority holding and management control for investment in india under conditions which, most foreign businessmen feel, are not unduly restrictive

Extract: During the CEO Forum event in October 2006, GOI officials including Commerce Minister Nath and Planning Commission Deputy Chairman Montek Singh Ahluwalia stated that they welcomed further Dow investment in India and did not believe that Dow was responsible for the disaster site clean-up.

Extract: The Ambassador also cited the GOI’s continued third party claims against Dow Chemical in the ongoing Bhopal land reclamation lawsuit as a further impediment by Dow and others to invest in India, and he asked that the GOI drop its claims against Dow. Ahluwalia took the Ambassador’s points on McDermott, noting the importance of finally putting the issue to rest. On Dow, he said that the GOI does not understand Dow’s concern about future civil or criminal liability since the GOI third-party claims do not suggest a GOI presumption that Dow is responsible for the clean-up.

The GOI’s problem is that the NGOs are very active and vocal in this case, and it is very difficult for the Government to now drop its claims against Dow. The GOI was hoping for a quick resolution of the case which would have settled the issue, but Dow prevented this by asking for a stay in the proceedings. Ahluwalia noted that the issue of whether a company like Dow can be held liable for the actions of another company solely on the basis of acquiring that company after the culpable activity occurred is an important and novel legal issue in India that needs to be resolved. Ahluwalia recommended that the Ambassador discuss the issue with Finance Minister Chidambaram – a noted jurist. (pervezbari@eth.net)