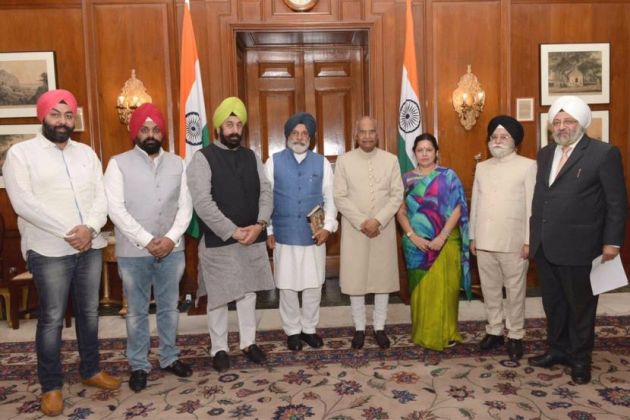 New Delhi : A delegation led by BJP MP on Tuesday met President Ram Nath Kovind apprising him of the fact that even eight months after the Supreme Court had appointed an SIT headed by Justice S.N. Dhingra to probe the 1984 anti-Sikh riots it has till date not notified the third member.

It submitted a memorandum apprising the President that the Supreme Court in its “self appointed SIT headed by Justice Dhingra has till date not notified the name of the third member (after one of the initially appointed members expressed inability to join SIT)”.

The SIT was to go into 186 cases in which closure report was filed within two months.

In their memorandum, the leaders said, “The SIT headed by Justice Dhingra, was set up in January 2018 and was to submit its report within two months on the cases related to Sikh carnage, 1984.

“But for reasons best known to them our wait for justice seems eternal as we haplessly watch the accused trying all within their might to influence witnesses.”

It said that every single day delayed dashes their hopes of receiving justice with the labyrinth of complicated judicial passage still to open up for Sikhs.

It also alleged that the matter was also raised in the court of the Chief Justice twice for notifying the name of the third member of the SIT, but was reprehensibly brushed aside as a non-issue.