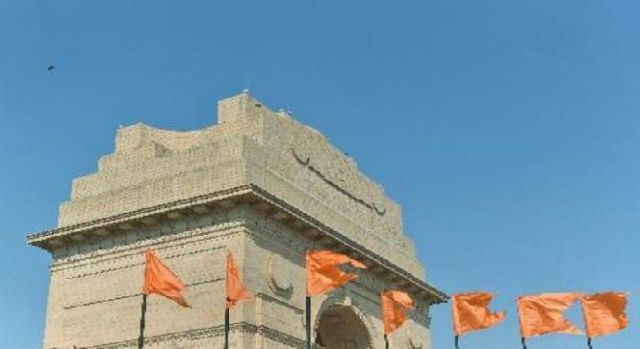 New Delhi : The BJP on Tuesday again criticised the Congress for allegedly coining the term “saffron terror” to defame the Hindus and sought an apology from its leadership, even though the opposition party had a day earlier denied the charge.

“(Congress leaders) Sonia Gandhi and Rahul Gandhi should apologise to the Hindu community for defaming them globally and taking the Hindus for granted. You can’t take the Hindus for granted. We believe in development of all and appeasement of none,” Bharatiya Janata Party Spokesperson Sambit Patra said at a press conference he addressed along with newly elected Rajya Sabha member G.V.L. Narsimha Rao.

Patra had on Monday also, accused the Congress of coining the term and sought an apology from its leadership. However, the Congress had maintained that neither its President Rahul Gandhi nor any other party functionary had ever used the term “saffron terror” and that its political rivals were levelling “baseless allegations”.

The BJP leader said: “Rahul Gandhi and Chidambaram should hold a joint press conference and speak on the issue.”

Dubbing Rahul Gandhi’s thinking as “anti-Hindu”, the BJP leader said a telegram sent in 2009 by then US Ambassador Tim Roemer to the US State Department mentioned that “Rahul Gandhi told the US envoy that there was some support for the Lashkar-e-Taiba in certain sections of India’s Muslims, but the bigger threat may be of the rise of radical homegrown Hindu groups which create tension”.

“This is the position of the Congress. Rahul Gandhi needs to answer all these questions. We demand that he should seek apology for what he told the US Ambassador against the Hindus. He can’t just say that it was a passing statement and nothing to do with the party,” Patra said.

The fresh war of words between the two parties on the term “saffron terror” began after a Special National Investigation Agency (NIA) court in Hyderabad acquitted all five accused in the 2007 Mecca Masjid bomb blast case on Monday.