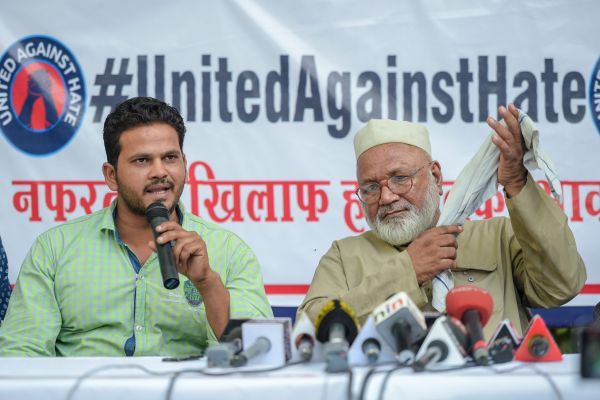 New Delhi (IANS): Cattle trader Qasim, who was lynched in Uttar Pradesh’s Hapur earlier this week, was “brutally killed by BJP goons as he belonged to the Muslim community” and dragged like dead animal in presence of police, his younger brother said on Friday.

“My brother screamed in pain for water, but the mob refused him saying he is a Muslim and butcher. He was dragged like a dead animal in front of police,” Mohammed Nadeem said at a press conference here.

Qasim was allegedly beaten to death and farmer Mohammed Samiyuddin was critically injured by a mob over alleged rumours of cow slaughter at Bajhera Khurd village in Hapur.

Nadeem said that around 11 a.m. four days back, his brother received a call from someone to purchase the cattle. “He left to make a deal but never came back to home.”

The press meet was organised by a fact-finding team of United Against Hate comprising of activists Nadeem Khan, Shariq Hussain and advocate Mushfiq and Shibli from the Association for Protection of Civil Rights (APCR) which visited the villages of the victims and met their family members.

The team were told that Qasim was a cattle trader, purchased buffalos and lambs from nearby villages and sold them at a local animal market called Paith.

Meanwhile, 67-year-old Samiyuddin, was allegedly thrashed and critically injured by the mob when he intervened and tried to pacify the attackers, and later admitted in private hospital.

Samiyuddin’s brother Mohammed Mehruddin said: “Police confused us for six hours in order so we can’t meet him. But finally we found him in private hospital lying unconscious on bed with his right hand thumb having blue colour impression.”

“We don’t know, what police have used this thumb impression for,” he added.

The fact-finding team said in a statement that before the lynching, an announcement was made from the nearby temple asking people to gather there, as cow killers had been caught red-handed – “which is a repeat of the modus operandi adopted in the Dadri incident where Akhlaq was lynched to death for allegedly consuming beef. Police however, say that they are not aware of any such announcement”.