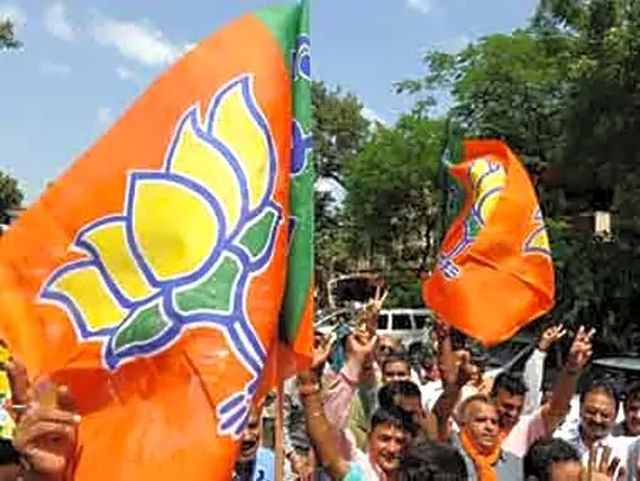 Lucknow : The lotus was in full bloom in 2017 as the Bharatiya Janata Party (BJP) emerged out of its 14-year political exile and stormed to power in India’s most populous and politically crucial state of Uttar Pradesh.

A year-and-a-half later, in 2018, the lotus has begun to wilt as evident from several developments over the year.

On the one hand, there is tremendous resentment in the party cadres, who slogged to keep the party flag flying for 14-years under successive and very hostile Samajwadi Party (SP) and Bahujan Samaj Party (BSP) governments. On the other, the very people who voted it to power are seemingly feeling betrayed as the BJP government under monk-turned-politician Yogi Adityanath is engaged in acts that are not only unwarranted but also least people-oriented.

A spree of police shoot-outs in the beginning of the BJP regime had sent chills down the spines of criminals across the state. The government strongly defended its police on the issue as human right watch dogs called them staged killings, specially in western Uttar Pradesh. Many people openly patted the BJP government for their action against criminals and the mafias, but in 2018 the picture changed.

There was the shock killing of a dreaded mafia don, Munna Bajrangi, inside a high-security prison, the shooting down of an Apple executive going back home from a product launch party by trigger-happy cops in the heart of the state and a ruling party legislator thrown into jail for the gang-rape of a minor girl — who then conspiring with his brother and henchmen to kill victim’s father.

The father had been crying out for justice by knocking on the doors of the police. His killing sent shockwaves across the state as many, even BJP supporters, felt that the “jungleraaj” the party inherited had not gone. The inept handling of the situation by the police and the state government worsened the crisis until the media launched a campaign and the judiciary was forced to sit up and take notice.

“I am terribly upset and disturbed by these incidents. I feel betrayed because we voted for the BJP so that the criminals are hounded out and peace returns to the state and its people feel secure” said Preeti Nigam, a teacher, adding that incidents of mob lynching and cow vigilantism have picked up in the past one year.

The last nail seems to be the killing of police Inspector Subodh Kumar Singh in Bulandshahr earlier this month, apparently at the hands of right-wing affiliate group cadres of the ruling establishment. Instead of the Chief Minister condemning the killing and asking the police to crack down on such fringe elements, who now threaten to disrupt the mainstream, he chose to maintain a stony silence.

The disconnect with the people and disenchantment of its voters can be clearly seen as the BJP lost the Gorakhpur, Phulpur and Kairana parliamentary by polls. Phulpur was held by incumbent Deputy Chief Minister Keshav Prasad Maurya while Gorakhpur had elected Adityanath as its MP for five straight terms.

The coming together of the Bahujan Samaj Party (BSP) and Samajwadi Party (SP) has changed the electoral equations in the state and political pundits feel that if this arrangement continues till the 2019 Lok Sabha polls, the BJP might be in for a major shocker in terms of its numbers. At present, with ally Apna Dal, it has 73 of the state’s 80 Lok Sabha seats.

On Monday, Om Prakash Rajbhar, a leader of an alliance partner who is a cabinet minister, predicted “decimation” of the BJP in the 2019 Lok Sabha polls if the proposed SP-BSP alliance goes through.

Adityanath’s utterances, behaviour and choice of words have shocked even his own party members. On the floor of the state assembly, the saffron-robed chief minister called the SP a “party of terrorists”, threatened them with violence.

He then, calling Lord Hanuman, the monkey God, a Dalit infuriating Hindus in large numbers. It is being felt that a large cross-section of the Hindu community prefers the Congress’s new-found ‘soft-Hindutva’ than the hardcore being served to them by the BJP. To top it all, the Ram Mandir followers are also disgruntled.

The state’s fledgling bureaucracy, after initial days of control, seems to have returned to to its uncontrolled ways. There are many instances when ministers and allies have openly charged babudom of not paying heed to them. Insiders in the government admit that “things are not too rosy now”. The outings of Adityanath to Gorakhnath Peeth and his many meetings with seers and saints, some feel, has “made him look casual towards governance and in continuity with his Hindutva image”.

While some good things — creation of the One District one Product (ODOP) campaign, farm loan waiver, electrification of the villages, investors meet — too have happened, they have had little impact on the ground.

With just a few months to go for the general elections, many find the ruling BJP on shaky ground while some are hopeful that Prime Minister Narendra Modi’s appeal would see them through this time too, albeit with a lower margin.