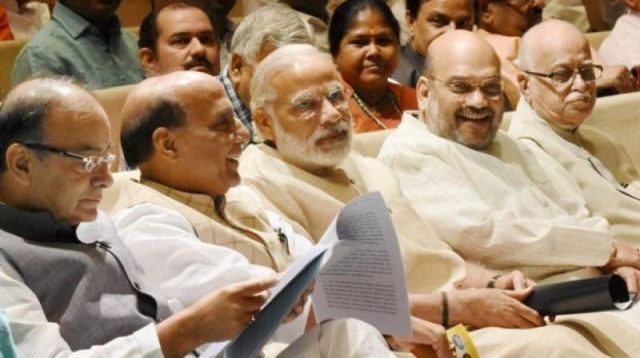 New Delhi : Issuing a whip to party MPs to be present in Parliament for the next two days, the BJP on Tuesday hit out at the opposition for “not allowing Parliament to function” and indicated that it will press ahead with the Union Budget-related processes even amid protests.

The Bharatiya Janata Party MPs were informed about the three-line whip — to remain present in both houses of Parliament for the next two days — and its strategy for ensuring the passage of the bills by Parliamentary Affairs Minister Ananth Kumar at a meeting of the BJP Parliamentary Party here.

The meeting was addressed by Kumar and Ministers of State for Parliamentary Affairs Vijay Goel and Arjun Ram Meghwal. Modi and Shah didn’t air their views.

Talking to reporters after the meeting, Kumar urged the Congress and other parties to let the house function.

“It seems (Congress leaders) Sonia Gandhi and Rahul Gandhi don’t believe in democracy. They speak outside (the house) on democracy but don’t practice it in Parliament. The Congress(men) doesn’t have democracy in their genes,” Kumar said.

He asked other parties to discuss the pending bills constructively.

“We have included all important issues in the list of business. We have also issued a three-line whip to all our MPs. We request all the parties to let the house function and hold constructive discussions,” the Minister said.

The whip is a clear indication that the Narendra Modi government is determined to get on with the completion of the necessary legislative procedures vis-a-vis the Union Budget despite opposition protests.

A BJP leader present in the meeting told IANS on condition of anonymity that the Finance Bill and Demands for Grants have to be cleared in this session and the party had thus asked all its MPs to remain present when that happens.

Both the houses were adjourned early on Tuesday after the Telugu Desam Party and some opposition parties protested on various issues, ranging from grant of special category status to Andhra Pradesh to the Punjab National Bank scam.