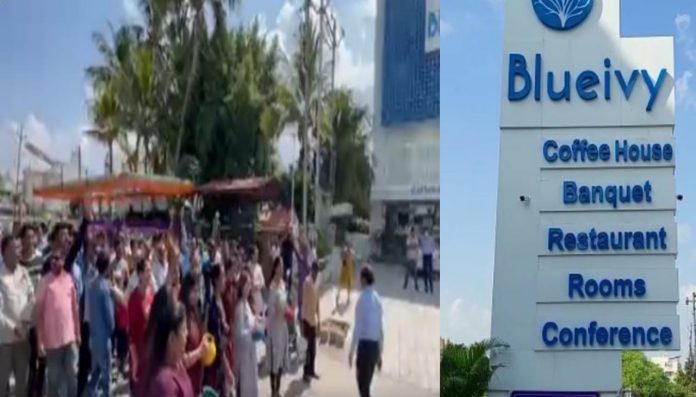 A group of extremist Hindus on 24 October opposed the inauguration of a restaurant recently built by five Muslim and two Hindu partners in Gujarat’s Anand town. They gathered outside the premises, made provocative speeches and raised slogans against Muslims.

They also organised hanuman chalisa and ‘shuddikaran’ [purification] of the path outside the restaurant by pouring ‘Ganga jal’ there.

Anand (Gujarat). #Hindu extremists opposing the opening of a restaurant owned a Muslim.They are sloughing slogans "If you want to stay in India, you will have to say Jai Sri Ram". #Hindutva.#RSS pic.twitter.com/yg7jPe6IBh

The man behind the entire episode is Dr Shailesh Shah, who lives beside the newly built restaurant. He had approached Anand-Vallabha Vidhyanagar-Karamsad Urban Development Authority (AVKUDA) alleging that some parts of the land, where the restaurant was being built, are illegally occupied by the owners. However, no action was taken by the AVKUDA on his plea. After that, he filed a petition in the Gujarat High Court, Mr Pathan narrated.

After the restaurant was built, Dr Shah gave a communal twist to the matter. He got support from hardline Hindu organisations and BJP leaders. They propagated that Muslims are indulging in ‘land jihad” and opening a restaurant in Hindu-majority area. They also distributed pamphlets in Gujarati language to further their propaganda.

Following opposition from these groups, the restaurant owners postponed the inauguration ceremony.

Islamic organisation Jamiat Ulama-e-Hind has given a memorandum to local Superintend of Police seeking action against Shailesh Shah, Pinkal Patia and others in connection with the provocative sloganeering that took place on 24 October.

On 25 October, the high court heard the matter and directed the AVKUDA to survey the land and filed a report by 28 October.