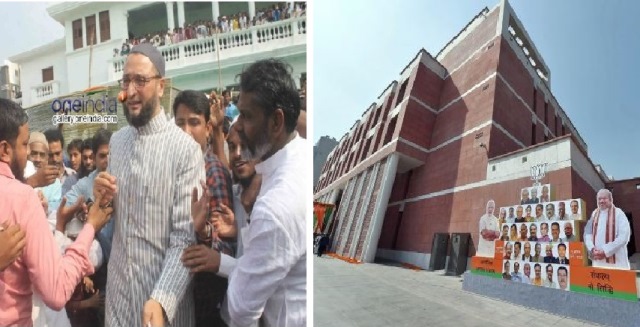 New Delhi : “Is this the BJP office or my office? Every party worker should think this is my office,” said PM Modi, a few days ago while inaugurating Bharatiya Janata Party’s (BJP) new headquarters at Deendayal Upadhyaya Marg, outside Lutyens’ Bungalow Zone in Delhi.

Built over 1.70 lac square feet, the BJP office is bigger than that of any other party in the world.

MIM was founded and shaped by Nawab Mahmood Nawaz Khan Qiledar of Hyderabad State with the ‘advice’ of Nawab Mir Osman Ali Khan, the Nizam of Hyderabad and in the presence of Ulma-e-Mashaeqeen in 1927 as a pro-Nizam party. At that time it was only ‘Majlis-e-Ittehad-ul-Muslimeen’ (MIM) and the first meeting of MIM was held in the house of Nawab Mahmood Nawaz Khan on November 12, 1927. In 1938, Bahadur Yar Jung was elected ‘president’ of the MIM which back then had a ‘cultural’ and religious manifesto. After the death of Bahadur Yar Jang in 1944, Qasim Rizvi was elected as the leader.

Owing to police action in 1948, Rizvi was arrested and released a decade later in 1957, on the condition that he would migrate to Pakistan within 24 hours of his release. Moments before leaving India, Rizvi and other MIM leaders called an urgent meeting  at the residence of a lawyer so that the legal aspects could be taken care off.

In an article in the Deccan Chronicle, historian Mohammed Noorduddin Khan writes, “Abdul Wahed Owaisi (Asaduddin’s grandfather) wasn’t even associated with the Majlis at that time and was just there out of curiosity. He was the youngest among those present at that meeting.” 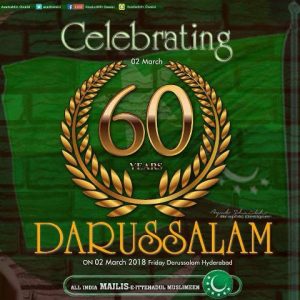 Khan says Rizvi disclosed at the meeting that he was leaving for Pakistan and wondered whether anyone was interested in taking over the reins of the Majlis. Everyone present there said that they were getting on in age and wanted someone younger to take over. It was then Abdul Wahed Owaisi, who stepped forward and said he was willing to head the organization. Nawab Mir Khader Ali Khan Abul-Ulai proposed Owaisi’s name and Rizvi seconded it. Interestingly, Abdul Wahed Owaisi was nowhere connected to MIM at that moment.

Abdul Wahed added ‘AI’ or All-India, to ‘MIM’, which from thereon has remained the family’s fiefdom of Owaisi. There is no denying that the Owaisis feel embarrassed about the party’s provenance and have tried to recast its history through selective omissions.

MIM was founded in 1927 but Darussalam- the headquarters of All India Majlis-e-Ittehadul Muslimeen (AIMIM) was built with personal wealth of Nawab Bahadur Yar Jung and his wife in 1940s. Facing paucity of funds, he also had to appeal to the community to donate, for the construction of Darussalam.

It is interesting to note that Congress was founded in 1885 and its first president was W.C. Bonnerjee. After 34 years Motilal Nehru became its president in 1919. Similarly Majlis-e-Ittehadul Muslimeen was founded by Nawab Mahmood Nawaz Khan in 1927 in Hyderabad and Abdul Wahid Owaisi took over it in 1958. Initially neither Nehru’s nor Owaisis were remotely attached with the above two organizations. Now these two organizations have turned into ‘personal properties’ of two families. This is how Dravidian theory works.

Today AIMIM is celebrating its 60th anniversary but the MIM web site itself says the ‘Majlis was founded in late 1920s’ and after almost a decade of inactivity, the Majlis was revived in 1958 by Maulvi Abdul Wahed Owaisi’.

Putting on skull cap, Sherwani and quoting Quranic verses in speeches can’t make someone honest and sincere. Occupying properties of community is a much bigger sin than land grabbing of individuals . BJP and RSS people are much more honest, sincere and committed to their ideology than the so called ‘Naqeeb-e-Millat’.