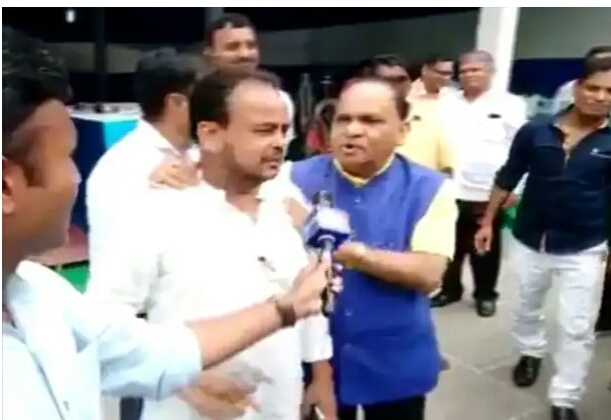 Ranchi : A  BJP minister in Jharkhand was seen on national TV brazenly asking a Muslim MLA to chant ‘Jai Shri Ram’. The minister was insisting that he was a “Ram wala” and that “Babur or Timur Lang”, the medieval were not his ancestors.

Ansari can be seen standing outside the Jharkhand assembly giving an interview to a reporter about BJP’s alleged misuse of the chant. He says that the party and its government has forgotten that “Ram is for everyone”.

Singh was seen wrapping his arm around Ansari’s shoulders and asking him to chant the slogan hailing the Lord.

What started in a lighter vein turned into a banter between the two and the video went viral and was even aired on national television. “Ek baar zor se Jai Shri Ram boliye” he is heard saying to Ansari in the video.

In reply Ansari showed him the red sacred thread tied ‘Mauli’ around his wrist to indicate that he was not anti-Hindu.

(Don’t bring a bad name to Ram. He belongs to everyone),” the young MLA shot back.

“People need jobs, roads, electricity. They want drains to be cleaned. Go to Ayodhya and see the condition of Ram there,” a visibly agitated Ansari said.

Ironically, last month a youth was mob lynched and forced to say ‘Jai Shri Ram’ in the same state. The youth Tabrez Ansari, 24, succumbed to the injuries and died, leaving behind a young widow.