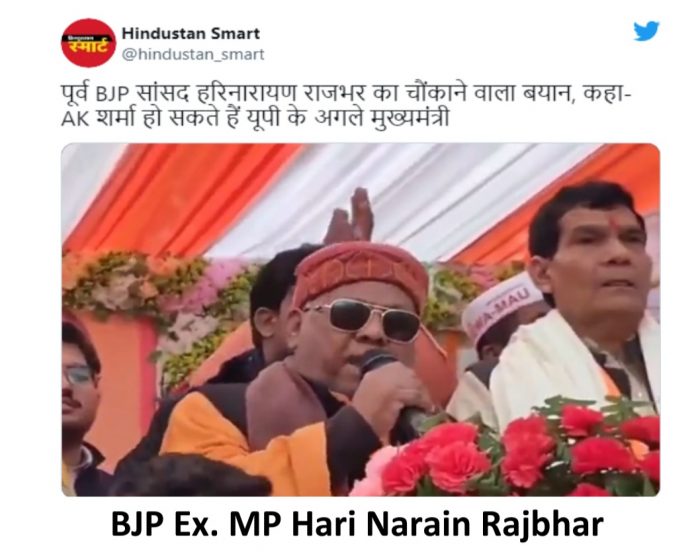 How many from UP remember that the ever-growing chasm between BJP UP CM Ajay Singh Bisht alias Yogi Adityanath and BJP PM Narendra Modi, was split wide open, when Arvind Kumar Sharma, an Ex. IAS officer was ‘denied a meeting’ by AS Bisht, and was refused a place in cabinet in AS Bisht government, and later Sharma had to be made a BJP MLC in June 2021. This was done as a part of the strategy to officially clip the wings of AS Bisht. AK Sharma has remained with Modi for a long time, and BJP after having sensed the Brahmin-vote to be into its ‘shifting-mode’, took the drastic step amid rife speculations that AK Sharma was soon to replace AS Bisht. That did not happen then, but will surely happen in 2022, if once in a million BJP might form the government. AK Sharma is a Brahmin, an Upper Caste Hindu.

The news item published in LiveHindustan on January 7, has left no room for any doubt that AS Bisht is never slated to assume to office in 2022, as BJP Ex. MP Hari Narain Rajbhar, in Mau, in a speech, has openly called for AK Sharma to be the next CM from UP. He spoke while AK Sharma was present on the stage. Everyone knows in UP that AK Sharma directly reports to Modi, and such a speech was never to happen, until there was a green signal from Modi. The message is clear. AS Bisht days are numbered.

Rajbhar has announced that Sharma might be the CM and therefore to make him so, BJP will strive for it, which means that the high-command of BJP is now all prepared to subdue AS Bisht. This declaration has come when AS Bisht personal popularity is on its all time low, as survey-after-survey, have shown the most probable ‘exit-door’ for BJP, and particularly so, in context to AS Bisht, as a recent survey on ABPLive had suggested, that 74% of UP voters are disgruntled with AS Bisht.

It is now getting abundantly clear, in the wake of the developments of the last few months, that it is in any case to be a curtains-down for AS Bisht-and more specifically so, when the fissures between him and Modi are wide open in the air. People at large have shown their disdain for the policies of BJP government i.e. in context to its massive mismanagement towards COIVD-19 second wave, the rising tide of price-rise of everything edible, petrol/diesel and practically everything which comes into for public use. Apart from this BJP is wary of AS Bisht policies too, and which, became starkly clear on the occasion of Purvanchal Expressway inauguration, on

November 16, 2021, as Modi dropped Yogi out of his car and instead made him walk-alone, in all media limelight, on the tarmac. Never has been a CM so bitterly humiliated.

BJP has clearly assuaged the downfall of AS Bisht, who has been quite ‘hard-nosed’ in all these years, but to ‘cool-his-heels’, the reinforcements from Delhi have been sent.

The arrival of AK Sharma in fact started to trigger the widening-wedge with Yogi in the open, which culminated in open- degradation of Yogi on November 16, 2021, and later which added to yet another move by the Center to send a new Chief Secretary from New Delhi. This development was of equal importance in terms ‘its political value’ as the making of UP Chief Secretary DS Mishra, a Brahmin, on December 29, 2021, made AS Bisht go into an all out doldrums. It was thus signaled that now New Delhi would allocate Chief Secretary and UP government will have ‘no say’ into it! This is what may be called that Center has totally made a mockery of the whole Yogi government.

UP has now two blue-eyed boys of Modi to ‘keep-an-eye’ on AS Bisht and his policies and report to New Delhi on a minute-to-minute basis, as Modi seem to anyhow ‘do-away’ with the excessive baggage of AS Bisht, as of now. The moves have been prompted to make a ‘damage-control’, from what AS Bisht policies have dented on BJP reputation, and to make a convention between the Center and the State, which perhaps had gone missing since long. What would also need to be mentioned here is that Yogi Adityanath had also been ‘day-dreaming’, as per his supporters, to even attain the position of PM too! Hence now, particularly after the entrance of two Brahmin bureaucrats, the proverbial ‘daggers-drawn’ between Yogi and Modi is the most fatal fait-accompli.

Another development which assumed considerable importance was an unannounced meeting of UP Deputy CM Keshav Prasad Maurya with Modi on December 6, 2021, which triggered reactions on social-media. It is an open fact, that Maurya and Yogi have not had a roller-coaster ride, as once Maurya had been publically humiliated by ‘forced-to-sit-on-a-stool’ making him earn the tag of a ‘stool-minister’, and this also led to a lot of ‘heat-generation’ inside Yogi’s camp, which already had been on fire, from probably all the four sides.

UP is now almost on the anvil of polls and the implementation moral code-of-conduct may be in force from anytime now, but the downward toil of BJP seems to be in full-swing. There is now a zero possibility of BJP claiming to power, and if there might be any remotest possibility, then BJP establishment has made structured plans for it, that it sans Yogi, despite the common thread of empty chairs in Modi, Yogi, Amit Shah, Nadda etc. rallies. Finally also it has been made clear that Yogi has been cut-to-size, with BJP in power or not. What will happen will soon be clear in 2022.