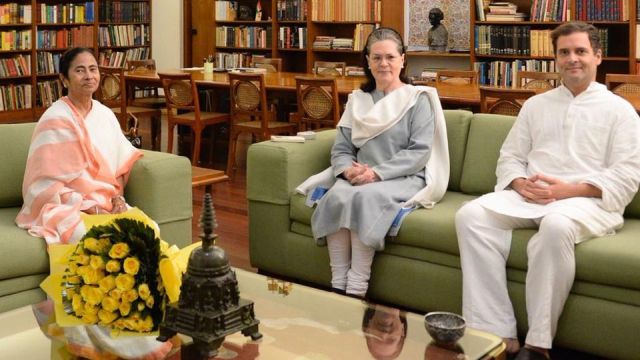 Kolkata: West Bengal chief minister and Trinamool Congress supremo Mamata Banerjee today said she was not vying to be the prime minister and that the first priority was to defeat the BJP which is “scared and nervous” to face the 2019 polls because of opposition unity.

Banerjee, who has been at the forefront of efforts to rally opposition parties for an anti-BJP front, spent the second day of her Delhi visit meeting leaders of various parties including UPA chairperson Sonia Gandhi and Congress president Rahul Gandhi.

“The opposition is united…. In 2019 BJP will be finished,” Banerjee, who invited the leaders of the opposition parties as well as Sena chief Uddhav Thackeray to her January 19 rally in Kolkata, told reporters.

The rally is seen as not just a show of opposition unity but also an attempt to catapult Banerjee to the centre stage.

“We are all for all. We will take a decision on collective leadership. If all opposition political parties can join hands and work together in Parliament, then why not fight unitedly outside,” the TMC supremo and West Bengal Chief Minister told reporters after her nearly half-an-hour long meeting with the Gandhis at 10, Janpath, the residence of Sonia Gandhi.

On the Congress’ indication of its willingness to accept her candidature as opposition’s PM face, she said, “I am not for any chair, our aim is to defeat the BJP.”

Almost all the opposition parties are holding preliminary talks to put a united fight against the BJP in the Lok Sabha polls next year.

Banerjee said she met both Sonia Gandhi and Rahul Gandhi and discussed the NRC issue as 40 lakh people have not been included in it and genuine voters had been kept out.

“We discussed the political situation. We discussed how the opposition can together take on the BJP because it knows that it will not come back to power,” she said.

Attacking the Centre on Assam’s National Register of Citizens final draft, she said, “People whose names have been kept out are from Bihar, UP, Tamil Nadu, Gujarat, West Bengal. We want them to live peacefully. Some of them are living for 100 years for five generations in Assam. How can you do this to them?”

Banerjee yesterday warned of a civil war and blood bath in the country in case 40 lakh people of Assam are left out of the NRC.

Banerjee met JD(S) leader Deve Gowda at Karnataka Bhavan and invited him to the rally.

She also met Advani at his chamber in Parliament House. “I went to meet him and enquired about his health,” she told reporters.

Suspended BJP Member of Parliament Kirti Azad hailed her as a great leader and said that her efforts to consolidate all opposition parties are “commendable”.

The TMC chief later went to the Central Hall of the Parliament to meet other opposition leaders and invited them to the rally.

Banerjee also appealed to all the opposition parties to send a joint delegation to the Election Commission against EVM tampering and to press for holding polls on ballots. “All opposition parties should go to EC on this matter,” Banerjee told the leaders.

Interestingly, Banerjee extended an invitation for the rally to the Shiv Sena chief through Raut who said the party would take a decision on it. Though a constituent of the NDA, the Sena has been openly critical of the Modi government.

She also appealed to the leaders to send an all-opposition-party delegation to Assam stating that though TMC delegation would be visiting the state on Thursday, other parties should also exert pressure on the government.