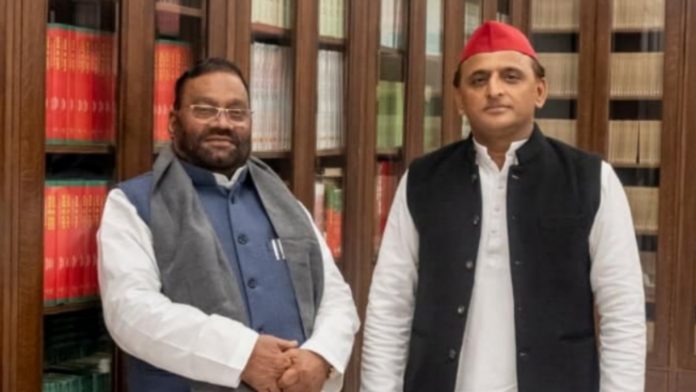 BJP had long lost its ground in UP. It is only now that it has got going, as since the model code of conduct was announced, there is a spree in BJP family being abandoned by its ministers and legislative members etc. The latest to have left BJP, on January 11, has been Swami Prasad Maurya , Ex. Cabinet Minister of Labour in BJP CM Ajay Singh Bisht government, followed by another BJP Cabinet Minister Dara Singh Chauhan and later by another minister Dharam Singh Saini-all backward caste leaders and all the three have accused BJP to be nursing an acute anti-Dalit and anti-backwards attitude which had been going unabated since the past five-years. Their exit, therefore, has exposed the civilizational bias which the Upper Caste Hindus i.e. Brahmin, Thakur and Vaish, have always espoused down the centuries, and which, seemed to have been only cosmetically cemented, in the name of anti-Muslim politics of BJP, and that the civilizational handicaps have become all open. Modern India is now to march ahead with only socialism and for social-justice.

With every passing hour there is now a news percolating that BJP MLAs are leaving BJP and are moving ahead to join Samajwadi Party (SP) led by Akhilesh Yadav. The way BJP ministers, leaders and members are making a beeline towards SP is a clear indication that a rout is what BJP is heading for. A shameful defeat is what awaits BJP, as BJP is falling apart like the proverbial house-of-cards, and the not so surprising aspect is that it is expected that very soon, not less than 100 MLAs are likely to bid adieu to BJP. This was claimed by Mukesh Verma, BJP MLA who after quitting BJP said that such ‘injections’ are likely to be administered daily! The writing on the wall is now getting clear that BJP even before the contest is to begin, has got a defeat-card waiting.

The backward ministers and leaders of BJP notwithstanding, the Brahmin leaders of BJP are too in a denial mode for BJP, as Bala Prasad Awasthi, a five-times MLA from Lakhimpur has also shut-the-door for BJP. Bala Prasad Awasthi is considered to have a lot of influence in Lakhimpur Kheri, the district where State Minister for Home Ajay Mishra hails from and whose son Ashish Mishra had mauled innocent protesting farmers under his cavalcade of SUVs in October last year. He has been accused of murder, as per the SIT chargesheet, formed on the direction of the Apex Court of the nation. This was immediately followed by Vijay Shakya, an OBC face, choosing to do-away with BJP.

What may be ironic to say that today Lucknow’s BJP main office, at Vidhan Sabha Marg, is not frequented by as many BJP MLAs then what may be called to be present at SP office! This is what exactly is the report-card of AS Bisht, which has forced the BJP legislators to look-for-options, other than BJP as BJP is now to be a sinking ship slated to hit rock-bottom. This all is a signal of the dwindling tally of BJP in the coming 2022 and also later 2024 which is also now almost in a nearing-mode. As, of course, once after the turn of this year, the political speculations for 2024 are to begin. SP is the only incumbent force, in the state of UP and going by the upward stride, SP nothing up a very sizeable tally, much more than what it had achieved in 2004 ( 40), there is every possibility that SP chief may don the ultimate mantle in the country.

BJP downslide is now on, as in the last three days, as many as seven-resignations have happened from inside BJP. The one-after-the-other wickets of BJP are falling, and if Mukesh Verma may be heeded, then this trend is all to continue and UP may be a witness to around 100 BJP MLAs deserting it. There is now a resignation probably every hour, with BJP trying to summon its damage-control which is now no where to be found, even as BJP speculates to make AS Bisht fight elections from Ayodhya. In order to put into its ultimate communal and polarization card.

Akhilesh Yadav, played his political calculus well into the den of BJP and weaned-out its non-Yadav towards SP-which is a perspective of socialism and secularism. SP chief also knows it well that more than 90% of the around 4-plus Crore Muslims are solidly behind SP. Muslims direct influence in on 135/403 seats. The message is clear, on these 135 seats, SP is a clear ahead, thus, making the balance to tilt in the favour of SP. The OBCs, Brahmins and Dalits and ‘walking-out’ of BJP towards SP, making it simple that BJP will be left with only licking-its-wounds in March 2022.

The political analysts can easily make out that when Cabinet Ministers of BJP, who are considered to exercise a lot of influence and have a control on masses, have thrown a pittance for BJP, then what is BJP left with? This is almost an anti-climax, as in the West Bengal Assembly elections in May 2021, BJP was engineering defections from TMC ruling party, owing to its money-machines, but here in UP SP does not have anything as such to offer! This rebellion is coming out, naturally from inside BJP, which has a Brahmin/Thakur supremacy model, and of course Vaish have been always traditionally with BJP, as it does not have any perspective for the OBCs and Dalits, except to bludgeon this chunk against Muslims, as an anti-dote to the implementation of the Mandal Commission Report, which triggered BJP to launch an anti-Muslim campaign against Babri Masjid, got it demolished in 1992, and now has an Apex Court verdict to build a Ram-Temple on the debris where Babri Masjid once stood in Ayodhya.

The Brahmins, owing to the civilizational supremacy tussle against the Thakurs ( the Caste of AS Bisht) had been given a cold-shoulder by BJP government, making them disgruntled to the core, in all these last five years, and have splurged their grouse against BJP every now and then. Brahmins have now showed their open-tilt for SP, as Akhilesh Yadav, unveiled the Brahmin icon Lord Parshuram idol on January 2, and OBCs sections like Rajbhar, Nishad, and Patel Samaj (s) have all started to move-out from BJP threshold, in the last around six months. Now Maurya Samaj have also joined the chorus. This is all the death-knell for BJP prospects.

The leaders who made BJP attain its brute majority in 2017, are now into their exit-mode, as Union Home Minister Amit Shah, Defense Minister Rajnath Singh and PM Narendra Modi have all gone silent, as never has there been an exodus witnessed towards SP. It is now clearly visible that not only people have decided to oust BJP, its leaders also now share the same element.

What will happen in 2022 is much awaited to be seen.

Road show in Varanasi no show in Pisochyn: Sibal