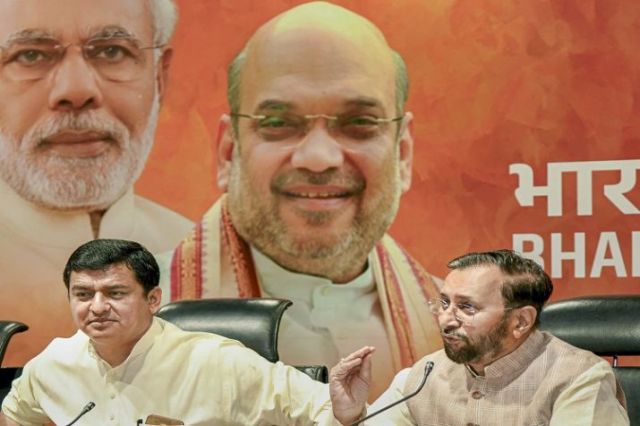 New Delhi : The BJP on Monday questioned the intention of Congress President Rahul Gandhi’s letter to Prime Minister Narendra Modi seeking support for the passage of the Women’s Reservation Bill in the Lok Sabha. Raising the women’s quota issue now is nothing but an attempt to divert public attention from his remark that ‘Congress a party of Muslims, the BJP said.

Addressing the media here, Union Minister Prakash Javadekar said: “Why did he raise this issue today? It is an attempt to divert the people’s attention from his remark that the Congress is a party of Muslims…This is the double standards of the Congress.”

Javadekar sought to know from the Congress chief whether he would also ensure the support of parties that were opposed to the bill in the past.

“The Congress has alliances with parties opposed to this bill. Will they come out of the alliance? Will they ask for letters of support from parties opposed to the bill,” Javadekar asked when questioned on Gandhi’s letter to Modi on Monday. However, he did not name the Samajwadi Party or the Rashtriya Janata Dal which had opposed the Bill and are now allies of the Congress in Uttar Pradesh and Bihar.

The BJP leader’s response came soon after Rahul Gandhi wrote to the Prime Minister to seek his support for the passage of the Women’s Reservation Bill in Parliament’s monsoon session. Gandhi said the BJP appears to have had second thoughts on the proposed law even though it was a key promise in its 2014 manifesto.

The Congress leader said the bill, passed by the Rajya Sabha in March 2010 during the UPA II government headed by Manmohan Singh, has been stalled in the Lok Sabha on one pretext or the other.

Gandhi said the bill holds the potential to transform the country’s governance and any further delay will make it impossible to implement it before the 2019 Lok Sabha elections.

The monsoon session will be held from July 18 till August 10.