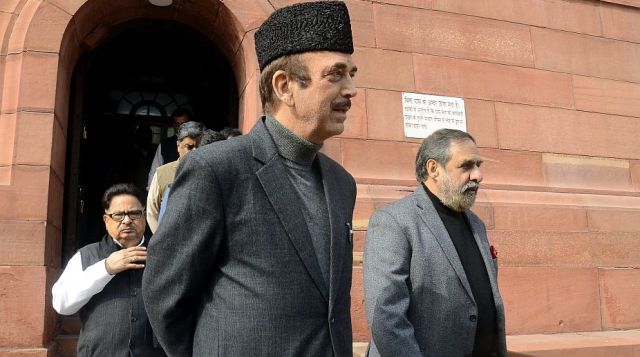 New Delhi : The Congress on Friday said that BJP was responsible for the “impasse in Rajya Sabha” due to which triple talaq bill could not be discussed, while alleging that BJP wanted to treat the Parliament as a “rubber stamp”.

“They (BJP) are squarely responsible for this impasse in Rajya Sabha. For the first time, the Union Ministers and the MPs were seen standing in Rajya Sabha and stalling the House,” Leader of Opposition in Rajya Sabha Ghulam Nabi Azad told reporters.

Azad also said the government was responsible for not being able to take up the bill in Rajya Sabha and sending it to Select Committee for closer scrutiny.

“We are totally in favour of the bill, but some provisions are objectionable. The government has not clarified about the sustenance of the victims. The government is also responsible for the chaos that was created in the Parliament,” he added.

Azad also said the delay in calling the winter session was for two reasons – first not to give the opposition a chance to raise the failures of the government in the House and second because the Prime Minister and the cabinet ministers were busy in the Gujarat election.

“From Prime Minister Narendra Modi to the all the ministers, they were all busy in Gujarat election.

“Be it election in any state, there is a new trend that union council of ministers are being converted to national election committee of BJP. All the ministers get involved in the election duty in that particular state,” he said, terming this “tradition” is not good for democracy and development of the nation.

“Just to win Gujarat election they didn’t let the Parliament to function. It has been proved they don’t believe in parliamentary democracy,” he added.

Congress leader Deepender Singh Hooda said that the government was not taking Parliament seriously and was treating it as a “rubber stamp”.