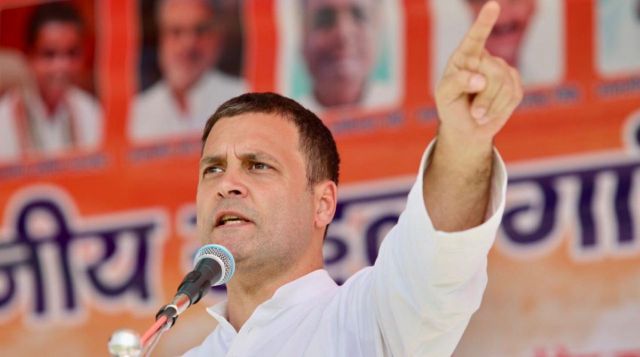 Champhai (Mizoram), Nov 20 : Congress President Rahul Gandhi on Tuesday said the BJP-RSS combine, which has a “divisive ideology”, was penetrating its people into government institutions in order to destroy the country’s democratic structure.

Addressing an election rally here, Gandhi said the saffron outfits were planning to enter Mizoram through local organisations such as the Mizoram National Front.

He said the BJP-RSS know they will not win the the 2019 general election.

“They know they are unlikely to win the next elections. Not just in Mizoram but across India. They are placing their people in places like Governors, attacking CBI (Central Bureau of Investigation), RBI (Reserve Bank of India), ECI (Election Commission of India) so as to attack the democratic institutions. The idea is that even if they lose, they will have their people.”

He attacked Prime Minister Narendra Modi over the ongoing controversies related to the Rafale deal and said the latter bought the fighter jets at a higher cost than what was finalized during Congress rule.

Gandhi said that the Congress believed in the ideology of harmony among different people, different languages and in inclusiveness and would not let the Bharatiya Janata Party (BJP) and the Rashtriya Swayamsevak Sangh (RSS) succeed in imposing only one-type of ideology across the country.

“They want the people from different cultures and languages to be divided and pitted against each other,” he said.

Gandhi also claimed the per capita income in Mizoram doubled during the 10-year Congress rule.

Mizoram, which has been under Congress leadership since 2008, is set to go to the polls on November 28.(IANS)