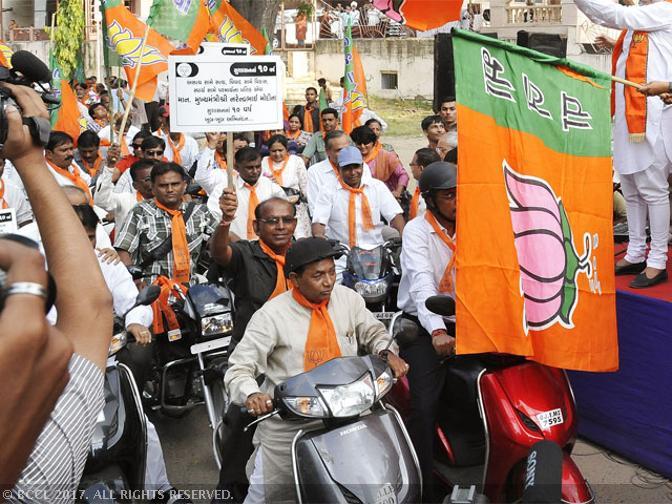 New Delhi :The Bharatiya Janata Party (BJP) on Monday accused Delhi Chief Minister Arvind Kejriwal of not fulfilling his poll promises for the national capital and sent a team of 250 bikers to Punjab to “expose the lies”.

The BJP also said that the bikers would search for the Aam Aadmi Party (AAP) Cabinet ministers, who have left the national capital for campaigning in the assembly polls of Punjab.

“The people who were tasked to look after the problems of the people of Delhi are missing from the city. Chief Minister Kejriwal and all his Cabinet ministers have left the Secretariat vacant,” Tiwari told reporters here.

“Today we have flagged off 250 bikers from the city to Punjab to search for Kejriwal and his team there,” Tiwari said.

“The man who can cheat the people of Delhi even after winning 67 out of 70 seats, what he will do with Punjab,” the BJP leader wondered.

“So we have sent our party workers to tell the people of Punjab how development work in Delhi has come to a standstill, how the government has failed to deliver on its major promises of increasing seats in schools and colleges, beds in hospitals, installing CCTV for beefing up women security, and providing free wifi and water,” Tiwari said.

Slamming Kejriwal for failing to fulfil his poll promises, Tiwari said: “The BJYM workers would apprise the youth of Punjab how they deceived youth with dreams of eight lakh job promises and how the residents of slums and unauthorised colonies were deceived with the promises of development and regularisation.”

Addressing the BJYM workers going to Punjab, Tiwari appealed: “A great responsibility lies on your shoulder of apprising the people and youth of Punjab of the ground realities in Delhi.”

“You should tell Punjab that Kejriwal sells dreams of anti-drug and anti-liquor campaign, but in Delhi his government has opened a chain of bars and liquor vends,” Tiwari said.

Meanwhile, Union Minister Rajyavardhan Singh Rathore said a special responsibility lay on the shoulders of the youths of Delhi to share their experience of two years of deception by the Kejriwal government with the youth of other states.

Kejriwal, also AAP’s National Convenor, has been aggressively campaigning for his party in Punjab and Goa, which go to polls on February 4.—IANS