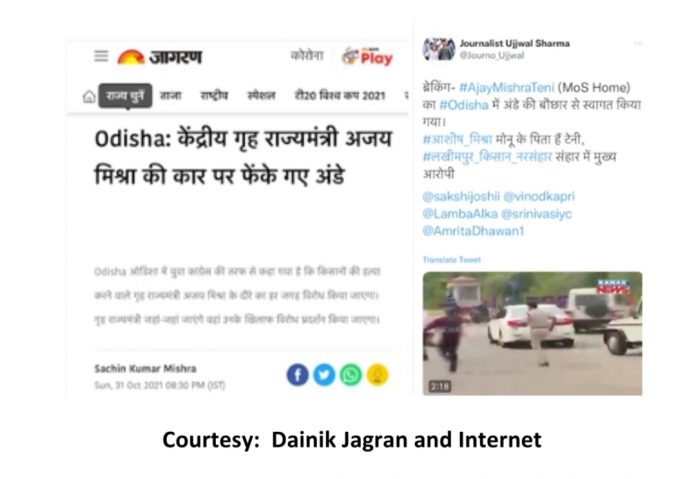 The variants of protests against BJP are fast changing, more aggressively since the three-laws against farmers were announced and which has seen protests, across the nation, for about one year now. The latest in the eye-of-storm is the Union Minister for State for Home Affairs, Ajay Mishra, whose cavalcade has been showered with eggs, forcing the minister to flee the scene in Odisha. People and farmers, forcing the BJP leaders to retreat from villages, disallowing them entry, showing black flags and even capturing the helipads, to not to allow BJP leaders from landing, as happened in the context to Union Defense Minister Rajnath Singh, have become a norm. But, BJP has shown no sign of any withdrawal from its stand on the three-laws, which therefore, will now be decided only through ballot, in various states, in the year 2022, and later at the Center in 2024.

It has been learnt that Ajay Mishra, was on an official visit to Odisha on October 31, and his convoy of vehicles was rained by eggs. Ajay Mishra is the father of Ashish Mishra, an accused in the killing of four innocent farmers by crushing them, allegedly by his cavalcade of SUVs on October 3 in Lakhimpur Kheri UP. Interestingly, Ajay Mishra had been forewarned not to visit, as Odisha has also witnessed an upsurge in farmers’ protests, who have been insulted and debased nationally, by the mauling of four- farmers by his son. No wonder, the country is debating as to how the father of the prime accused of the Lakhimpur Kheri genocide, is still riding the crest, whereas, he deserved was to have been snatched-off from his ministry. But, that is what may be only a wishful-thinking as BJP can never be expected for it, therefore, people too have started to show BJP, their anger, which is now splurged on the streets.

It is pertinent to recount that when Ashish Mishra had allegedly ran over the farmers, his father (Ajay Mishra) was offering-to-resign, if his son was involved, and around six-days later when Ashish was arrested, as he had fled to Nepal, within a month, the DIG who had arrested him and the DM were transferred. There is now not the smallest question of ever Ajay Mishra relinquishing his office, and in order to further add salt-to-injury, Ajay Mishra stood together with Union Home Minister Amit Shah on the latter’s visit to Lucknow on October 29, where ironically, Amit Shah referred to binoculars to be used to search for mafias and musclemen, whereas, the father of a murder accused, stood by his side on the same dais! It can be anyone’s guess that until Ajay Mishra holds the reins of police, if ever police will try to find-out-the real murderer of Lakhimpur Kheri?

What would merit an attention is that it was once Swami Chinmayamand, who was the Minister of State for Internal Affairs in BJP PM AB Vajpayee government (1999-2004) who was sent behind bars recently on the charges of rape, and the second is Ajay Mishra who openly threatened farmers to be banished beyond Palia ( at a distance of about 90 kms from Lakhimpur Kheri) and that he would make farmers come to their senses in two-minutes, that later his son allegedly ran -over his SUVs on the protesting farmers. Perhaps, only BJP can make such luminaries (sic) hog the rank of a Union Minister for State for Home Affairs! But, all this has now added an anger almost to palpable limits in people all over the nation.

There have been anti-BJP sentiments coming out from Ayodhya, UP too, as seers had gathered to lambast BJP over its policy to impose house tax, water tax etc on Temples/Maths in Ayodhya, which is place to the dispute of Babri Masjid/Ram Janambhumi ,and where, after the November 30, 2019 judgement, Lord Rama Temple is to be built on the site of Babri Masjid, notwithstanding the land-scam generated from it as Ramjanambhum Trust members were allegedly involved into swindling millions from the land deals. Interestingly, the seers related Ghayas-ud-Din Tughlaq who had waved-off the taxes from religious places, in 1351 AD, and after so many centuries, the taxes for the first time are levied on Temples/Maths in Ayodhya. 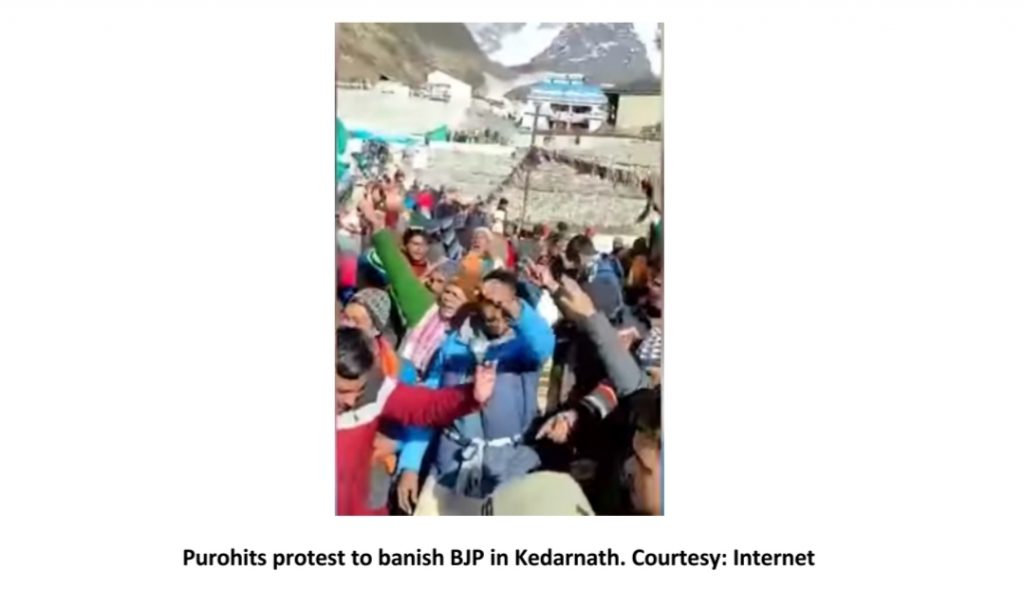 There have been vociferous voices against BJP coming out from the Hindu majority state Uttarakhand, though all states are Hindu majority, which is quite a contrast, as this state was always considered as a BJP permanent fiefdom. It has got reported that seers and purohits (religious figures) gathered in large numbers to protest against BJP and refused BJP Ex. CM of Uttrakhand Trivendra Singh Rawat and Dehradun Mayor Sunil Uniyal to allow entry into Kedarnath temple. Both were forced to return on November 2. The video available on the internet shows ‘seers and purohits’ along with lots of people calling for a boycott of BJP and that Uttarakhand should have no BJP. The protest is the outcome of the policies of BJP as Rawat had decided, through legislation, that a Chardham Devastanam Board, be made, which seers and purohits, consider as an interference in their rights. Rawat was refused to offer prayers at Kedarnath which is one of the very sacred sites of Hindus.

There is now an anti-BJP sentiment all across India, and which, is to be reflected in the coming five-states elections. The price-rise of everything is what has made people loath BJP as petrol/diesel prices are permanently on the rise by around 35 paise per day, which means Rs 1 every third day or Rs 10 per month. There is no one on the street or in the household who is not harried; the latest to hit is the increase of Rs 266 in the price of commercial gas cylinder. If the same streak goes, India will soon find petrol/diesel for Rs 200 per liter, which will enhance the price of everything under the sun. Perhaps, soon India is to stand against BJP.