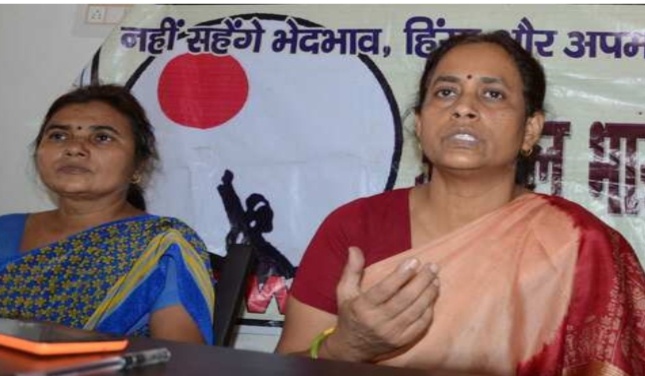 Make better laws against ‘ hate’ not against ‘love’

New Delhi : Prominent women group the All India Progressive Women’s Association (AIPWA) on Wednesday condemned the announcement of BJP ruled states about a law against so-called ‘Love Jihad’. It said the proposed law is an attack on Rights of Hindu Women enshrined in the Constitution . The group suggested to make better laws against ‘hate’ not against ‘love’.

Many BJP-ruled State governments have announced that they are going to make a law against ‘Love Jihad’. Central Minister Giriraj Singh has also demanded such a law in Bihar. The UP cabinet on Tuesday approved a draft of an ordinance to make inter-faith marriage a criminal act.

AIPWA national president, Rati Rao said  we strongly oppose any such law because such a law would be a lethal attack on the freedom of Hindu women and their Constitutional right to make their own decisions in life. Such a law has no place in India that believes in Ambedkar’s Constitution.

Tilldate the police, investigative agencies, and courts in many States and the country have said that there is no such thing as ‘Love Jehad’. There is no proof for saying that Muslim youth are hatching a conspiracy to convert Hindu women under the guise of love. The truth is that the youth of India are breaking the bonds of caste and religion and falling in love, and this is to be welcomed as beneficial to the country.

According to the BJP, if a Hindu woman loves a Muslim man it will be considered ‘Love Jihad’ and legal action will be taken against this. All in all, a legal weapon is being handed to ‘honor crime’, the patriarchal violence against love.

Meena Tiwari, National General Secretary, recalled that by standing resolutely against Manuvadi patriarchal forces, Dr Ambedkar had passed the Hindu Code Bill that has many provisions for equality and freedom of Hindu women.

Laws against the dowry system and Sati practice were made after long battles.

The law against ‘Love Jihad’ is a BJP conspiracy to weaken these laws and snatch away Constitutional rights of Hindu women, she added. “Therefore today the danger to Hindu girls and women is not from Muslim youth but from the BJP which is playing politics in the name of Hindus. History is witness to the fact that all ruling forces that run the government in the name of any religion are the enemies of women’s rights”.

They referred to many incidents to buttress the point that love can never be a ‘jihad’ or a war.

“Nikita Tomar was stalked and murdered by a Muslim youth –but that was not ‘Love Jihad’ because Nikita was not in love with that youth. Stalking and killing was also done of Priyadarshini Mattoo by Santosh Singh. Similarly, some Hindu youth killed Gulnaz in Bihar—that is also patriarchal violence, not ‘Prem Yuddh’ or ‘Love war’.”

Another functionary of the AIPWA, Kavita Krishnan underlined that any adult citizen has the right to adopt any religion according to his personal wish and discretion and take their own decisions in matters of love and marriage.

They said that AIPWA demands that the provisions of the Special Marriage Act should be changed and the one-month notice period should be scrapped.

They also appealed to the women and youth of the country to stand up and be counted to save freedom and autonomy.

“Where better laws and action are needed against ‘hate’, BJP wants to make a law against ‘love’! We appeal to the people of the country to foil this conspiracy by the BJP”.