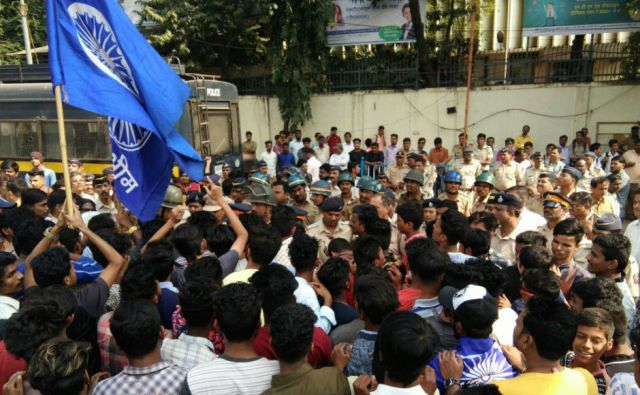 For the third time since the Narendra Modi government’s assumption of office, the Dalits have come into conflict with the Hindutva brigade. The first time was in Una in Gujarat, where a group of Dalits were thrashed by saffron activists for skinning a cow, a traditional occupation of the “untouchables”.

The second time was in Hyderabad central university where a standoff between members of the Ambedkar Students Association and the Akhil Bharatiya Vidyarthi Parishad (ABVP), the Bharatiya Janata Party’s (BJP) student wing, led to the suicide of a Dalit student, Rohith Vemula.

Now, perhaps the most serious of all these incidents has taken place in Maharashtra following the objections of Hindu Right organisations to the celebrations by Dalits of an 1818 battle in the village of Koregaon on the banks of the Bhima river near Pune in which the “untouchable” Mahar soldiers of a British army defeated the upper caste Marathas.

Considering that these celebrations have been held for decades without the rest of the country noting it as an event of great significance even when B.R. Ambedkar participated in them in 1927, it is noteworthy that they should have led this time to a violent outbreak which spread from Pune to Mumbai and other Maharashtra towns.

Evidently, the Hindu Right groups have been emboldened by the BJP’s political ascendancy to decide to stop an instance of Dalit assertion, not least because it targeted the upper caste Peshwa rulers of the state of the 19th and earlier centuries.

The episode was a much larger version of the clash which took place in Saharanpur, Uttar Pradesh, between Dalits and the Rajputs in May last year when the former objected to the processions taken out by the Rajputs to celebrate the birth anniversary of Maharana Pratap. A few weeks earlier, the latter had objected to the celebrations of Ambedkar’s birth anniversary by the Dalits.

What these episodes show is that unlike in the past, the Dalits are unwilling to commemorate their days of pride in a low key and are also ready to object to the noisy festivities of the upper castes.

The Bhima-Koregaon event may have kindled the ire of the Hindu Right all the more because of the unapologetic participation of the Dalit soldiers with the British army to defeat a Hindu ruler.

This is something which evidently riles the ultra-nationalists associated with the saffron brotherhood at a time when they are engaged in rewriting history to suit their own fads and prejudices as is evident in their objections to a yet-to-be-released film on a fabled Rajput queen.

In such a time of triumphal chauvinism, the Dalit-East India Company collaboration is obviously unacceptable to the Hindu Right, especially when Ambedkar had noted that the “untouchable” Dusads had helped Robert Clive to win the battle of Plassey in 1757, just as the “untouchable” Mahars, a community to which Ambedkar himself belonged, had helped the “foreigners” to win in Koregaon.

Not surprisingly, Ambedkar had not been a favourite of the BJP till recently when the party changed its mind about him after realising the high political cost of alienating both the Muslims and Dalits.

However, the party’s “mann ki baat” or speaking one’s mind about the Dalits was succinctly expressed by Arun Shourie, who was a minister in Atal Behari Vajpayee’s government, in his book, “Worshipping False Gods”, in which he said that “there is not one instance, not one single solitary instance, in which Ambedkar participated in any activity connected with the struggle to free the country”.

Considering that there are not too many instances of the Rashtriya Swayamsevak Sangh (RSS) participating in “any activity” to free the country, Shourie’s charge cannot be taken seriously. But it does underline the traditional Brahmin-Bania outlook of the Sangh Parivar towards the Dalits and their foremost leader.

The objections voiced by the RSS chief, Mohan Bhagwat, about the continuing reservations for Dalits in government jobs and educational institutions also denote the saffron attitude which is resented by the latter.

The BJP has tried to make amends by nominating a Dalit, Ramnath Kovind, as the country’s President, but it is unlikely to make any difference to the longstanding antipathy of the community towards a party whose hardliners swear by the Manusmriti, an ancient book which was once “ceremonially” burnt by Ambedkar along with hundreds of his followers for its anti-Dalit pronouncements.

For the BJP, the latest confrontation with the Dalits carries a disturbing message on the eve of elections in as many as eight states this year, including those where the party is expected to face the anti-incumbency factor.

While the BJP’s success in winning 69 of the 85 reserved seats in Uttar Pradesh last summer showed that the party was gaining the support of the Dalits, the trend was not in evidence in the recent Gujarat elections where, among other things, the victory of the previously unknown Jignesh Mewani, by a margin of 19,000 votes, pointed to the disaffection of the Dalits with the saffron organisation. Mewani emerged from nowhere after the Una incident to become a well-known figure in today’s politics.

There is little doubt that farily large sections of the Dalits, who make up 16.6 per cent of the population, as well as Muslims, who comprise 14.2 per cent, harbour reservations about the BJP, notwithstanding its attempt to placate at least the Muslim women by bringing the triple talaq bill. The BJP cannot but be deeply worried, therefore, about the impact of their alienation on the forthcoming elections.