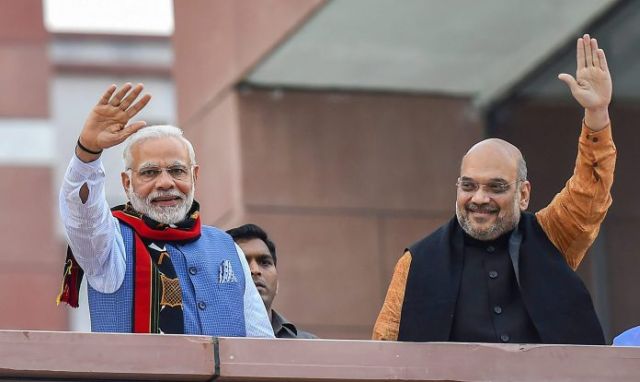 The Shakespearean phrase “fair is foul, foul is fair” can be one way of describing the contradictory nature of the Bharatiya Janata Party’s (BJP) policies in different parts of the country.

The party’s penchant for trimming its sails in accordance with regional sentiments as, for instance, over the consumption of beef, can also be described in the words of a Hindi film song, “Jo tumko ho pasand wohi baat kahengey” (I will say whatever you want me to say).

While saffron mobs have been assaulting those suspected of eating beef or transporting cattle in northern India, the BJP’s stand in the northeastern states, and also in Goa, is that beef is kosher. When a party spokesman was questioned about this dichotomy during a television debate on the northeastern polls, he used the word, binary, to explain the BJP’s stand.

If this duality indicates an acceptance by the party of India’s diversity and a refusal to abide by the preferences of the orthodox elements that have had a dominating presence in the party till now, it is a welcome development. This step in the direction of multicultural norms can be seen as an accommodative approach which has not been the BJP’s strong point till now although it is the hallmark of all “secular” parties.

However, many people will suspect that this genuflexion towards northeastern sensitivities is no more than an expedient tactical manoeuvre. If the BJP can change its colour once, like a chameleon, it can do so again. It will be advisable, therefore, to wait to see if the BJP is serious or is merely playing political games by trying to pull the wool over the people’s eyes.

The reason for the doubts is that irrespective of the policies which the BJP pursues in the northeast, it is unlikely to change its stance on dietary preferences and other lifestyle issues elsewhere in the country. There is also little doubt that it will find it extremely difficult to pull of the trick of being different parties in different parts of the country without being tied up in knots.

It is unlikely, therefore, that the BJP will look on benignly if any beef parties are held in Nagaland or Meghalaya as they were earlier in Kerala and Tamil Nadu. In all probability, the BJP’s objective is to first establish its political authority in the northeastern states and then try, ever so slowly, to inculcate its culinary fetishes in the society as a whole.

Given, however, the fragile nature of the coalitions it has helped to set up as a “facilitator”, as a spokesman explained the party’s tactics, it is doubtful if the BJP will succeed in persuading the northeasterners to replicate the lifestyles of the denizens of the cow belt if only because the regional outfits which are currently its allies will not like to be seen dancing to the tune of a Hindu-Hindi party.

The gulf will remain, therefore, between the BJP in the northeast and elsewhere in the country. The political implication of this dichotomy is that the party’s ups and downs in its new areas of “conquest” will have only a limited impact on its fortunes in the rest of India in view of the perception of the northeast as a remote, exotic region whose society and politics have no more than a marginal influence on the mainland.

Even then, the BJP will have to come to terms, albeit reluctantly, with the lifestyle of the northeasterners. To do so, the party will have to tweak its own “lifestyle” as it did when it put aside three core items on its agenda in 1996 by shelving the issues of building the Ram temple in Ayodhya, introducing a uniform civil code and scrapping Article 370 conferring special status on Kashmir after it found that no other party was supporting Atal Behari Vajpayee’s first minority government of 13 days.

When he finally returned to power two years later, his emphasis was more on keeping his 24-party coalition together than on pushing the saffron ideology. Narendra Modi is lucky in that the BJP has a majority in the Lok Sabha. But the possibility that the party will not be able to fare as well in the next general election and, therefore, may lose some of the seats it won in northern and western India has made the BJP try to make inroads into the virgin territory of the northeast where it doesn’t have much of a base.

Its main disadvantage in this region is the predominance of Christianity. To win hearts and minds, therefore, the BJP is having to tone down its anti-minority utterances along with denoting its acceptance of the non-vegetarian eating habits of the locals.

What is more, since the BJP doesn’t have too many supporters at the ground level, it has had to co-opt the members of other parties such as the Congress in Tripura. However, what impact the induction of these fair-weather birds will have on the BJP’s organisational cohesion will only be known in the future.