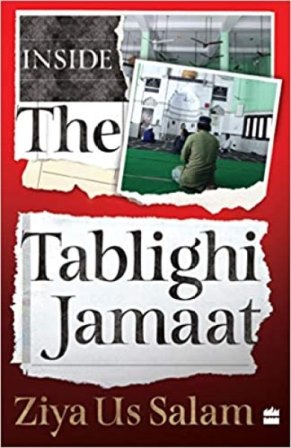 Tablighi Jamaat, the most popular and influential organization of Muslim community  has been very latent on worldly affairs since its inception. One may have never come across any commentary from them as an organization on any socio-political issue even if it concerns the Muslims. Though, newspapers often share their pictures and details of their large annual gatherings with tags emphasizing on their gigantic numbers.

Along with the COVID 19 pandemic, The Tablighi Jamaat came in the main stream media, with fake news and hate campaign tarnishing their image contrary to their popular picture of humble beings who have nothing to do with the world outside.

Ziya Us Salam takes a critical look at the Tablighi Jamaat and presents a very critical character sketch of its members. Some of the accounts presented in the book seem inspired by the pranks and memes that circulate on the social media. A constant comparison of the Tablighi Jamaat and other Muslim organizations  like the Jamaat e Islami Hind and the Jamiat Ulama e Hind presents a biased narrative here and there and often are not needed. Though the fact that the Tablighi Jamaat have to go a long way in making the link between deen (faith) and duniya (world) and establishing the essence of ritualistic practices cannot be omitted.

The depiction of the Tablighi Jamaat, its geographical location and the air around its vicinity in the book is done as if it’s a world within a world which has completely de linked itself from the outside. While reading the book one can get that the members of the Tablighi Jamaat are not educated enough and often apolitical. This can be only partly true as its members often are academicians, civil servants, doctors etc.

As far as the issue of being apolitical is considered, it’s more by choice and less due to their educational backwardness. Though as an organization they have taken no part in any socio-political issue, but outside the organization, its members have their political stand and at individual levels they have their engagements. The Tablighi Jamaat does not interfere in such affairs and has no objections to these activities of its members and is concerned only with the spiritual reformation of its members. The author’s comment on this aspect and deriving support from the fundamentals of Islam gives its readers a view on the objective of Islam and how the Tablighi Jamaat has somewhere failed to live up to the greater purpose of Islam.

The book gives interesting accounts how the spread of Tablighi Jamaat and its work to the farthest corners of the world ironically not making much use of the modern means of communication. Collection of episodes from Pakistan and the hold of the Tablighi Jamaat on the cricket players are noteworthy. The chapter, ‘All in the Family’ is important which questions power structure within the Tablighi Jamaat where the leadership resides in the hands of a particular family.

The book relies heavily on secondary sources and the author has been very selective in picking anecdotes. His bias is constantly reflected in his choice of words and constant comparison. As a book it is lengthy and one has to drag through constant repetition of facts. For those who are completely unaware of the Tablighi Jamaat, the book can be a good introduction to its fundamental working and organization. However, there is a question which still needs to be explored, i.e. does the Tablighi Jamaat exits because of its people where it some where fills certain voids in them, unlike other organizations  where people exist because of their organization which quenches their intellectual thirst and directs them. The reason behind the popularity of the Tablighi Jamaat though being obsolete in its affairs must be explored and tapped.