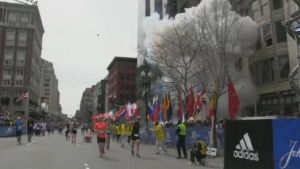 Washington, April 17 : Investigators looking for clues to the Boston Marathon bombings that killed three people and injured another 176 would try to reconstruct the bombs said to be made of pressure cookers filled with nails and ball bearings.

Fragments of nails, ball bearings and scraps of black nylon — possibly from a backpack found at the site of the twin blasts near the marathon finish line are being sent to the Federal Bureau of Investigation’s laboratory at Quantico, Virginia, “for a complete and thorough analysis.”

One aim is to better understand how they worked; another is to look for “identification clues” such as fingerprints, DNA or serial numbers to help track who planted them, CNN reported citing Boston law enforcement source.

The pieces recovered so far suggest the devices, which were identical, could carry 6 litres of liquid apiece, officials said. The parts found include a partial circuit board, which would be used to detonate a device.

At a news conference in Boston Tuesday, Rick DesLauriers, the special agent in charge of the FBI’s Boston office who is leading the investigation, also asked people to report anyone who talked about targeting Monday’s race or showed interest in explosives.

He urged anyone who might have heard the sounds of explosions in remote areas — possibly by someone testing a bomb — or saw someone carrying “an unusually heavy, dark-coloured bag” around Monday to come forward.

There has been no claim of responsibility, DesLauriers said: “The range of suspects and motives remains wide open.” And so far, investigators have found no foreign or Al Qaeda connection to the bombings, a US official told CNN.

President Barack Obama, who called the bombings an “act of terror” Tuesday, will travel to Boston on Thursday to speak at an interfaith service dedicated to the victims of Monday’s bombing, the White House announced in a statement

As cities across the United States heightened security, Homeland Security Secretary Janet Napolitano said the bombings don’t appear to be harbingers of “a broader plot.”

But she urged Americans “to remain vigilant and immediately report any signs of suspicious activity to local law enforcement officials.”

“There are a lot of things that are surrounding this that would give an indication that it may have been a domestic terrorist, but that just can’t be assumed,” Senator Saxby Chambliss, the top Republican on the panel, told reporters afterwards.

Investigators are combing through shreds of evidence from what Boston Police Commissioner Ed Davis called “the most complex crime scene that we’ve dealt with in the history of our department.”

Authorities have begun to search through huge amounts of video and images from surveillance cameras in the area near the attack. So far, no footage has been spotted showing someone placing the bombs, a law enforcement source said.

The FBI is also seeking records from cell towers in the area to isolate and trace calls from around Copley Square at the time of the blasts.

The intelligence community is poring through all threat reporting for any clues, US counterterrorism officials told CNN. That includes any claims made on jihadist websites. Nothing is being dismissed this early on.

Investigators “have a number of active leads and some good early progress in the forensics analysis,” according to a law enforcement official cited by the channel.

(Arun Kumar can be contacted at arun.kumar@ians.in )—IANS.