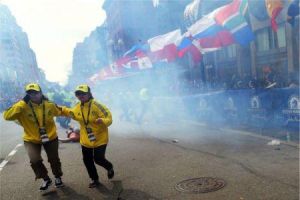 Washington, April 23: Lying in hospital, a badly injured surviving suspect of the deadly Boston Marathon bombing that killed three people and injured over 180 was charged with using a weapon of mass destruction and faces the death penalty if convicted.

Initial proceedings against Dzhokhar Tsarnaev, 19, who was captured Friday night after a massive manhunt were conducted Monday at Boston’s Beth Israel Deaconess Medical Centre by a federal magistrate judge with two assistant US attorneys, including Indian American Aloke Chakravarty appearing for the prosecution.

Chakravarty and William Weinreb from the antiterrorism and national security unit of the US Attorney’s office in Boston, will prosecute Tsarnaev, who remains under armed guard in serious condition, the Justice Department announced Monday.

Tsarnaev, who is unable to speak because of throat injuries, was able to respond to inquiries, nodding yes and at one point even mouthing the word, “No,” according to a transcript of the hearing.

The 19-year-old Cambridge man, who had escaped a shootout with police that killed the second suspect his older brother Tamerlan, 26, dead early Friday morning, also faces a charge of malicious destruction of property resulting in death.

Federal charges were brought against Tsarnaev Monday after the White House decided against trying him as an enemy combatant as demanded by some Republican lawmakers including President Barack Obama’s 2008 presidential rival John McCain and Senator Lindsey Graham.,

“He will not be treated as an enemy combatant,” White House spokesman Jay Carney said in Washington. “We will prosecute this terrorist through our civilian system of justice.”

Carney stressed that the civilian system has been used to try, convict and incarcerate “hundreds of terrorists” since the 9/11 attacks, including the Times Square attempted bomber. “The system has repeatedly proved that it can successfully handle the threats we continue to face,” he said.

“Although our investigation is ongoing, today’s charges bring a successful end to a tragic week for the city of Boston and for our country,” said Attorney General Eric Holder.

Tsarnaev waived his right to a detention hearing. His next hearing will be May 30, court officials said.

An affidavit filed in support of the charges by FBI Special Agent Daniel R.Genck provided startling details of the evidence collected against Tsarnaev connecting him to the deadly bombs.

The affidavit said, among other things, that, based on reviews of surveillance video, and photos and videos provided by the public, Tsarnaev stood for four minutes next to a bomb that he had placed on the ground in front of the Forum Restaurant on Boylston Street.

He had a cell phone in his hand and appeared to take a photograph of the bomb on the sidewalk before he walked away, the affidavit said.

About 30 seconds before the first explosion hit just down the street 120 yards away, near the Marathon’s finish line, “he lifts his phone to his ear as if he is speaking on his cell phone, and keeps it there for approximately 18 seconds.

“He walks away without his knapsack, having left it on the ground where he had been standing. Approximately, 10 second later, an explosion occurs in the location where Bomber Two had placed his knapsack,” Genck added.

The affidavits also revealed that the FBI searched Tsarnaev’s dorm room at the University of Massachusetts Dartmouth Sunday and found “a large pyrotechnic, a black jacket and white hat of the same general appearance as those worn by Bomber Two at the Boston Marathon.”

The affidavit referred to Tsarnaev as “Bomber Two” a slight variation from what officials had called him previously, “Suspect Two.”

(Arun Kumar can be contacted at arun.kumar@ians.in)