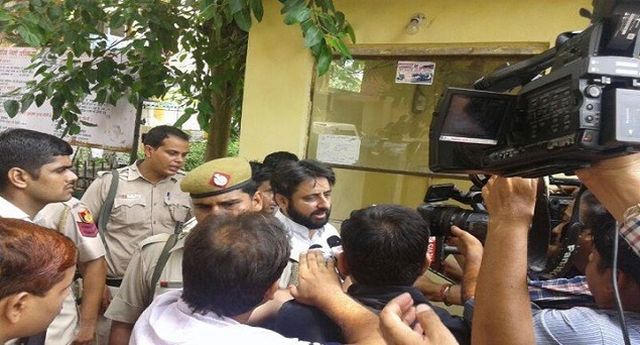 New Delhi : Calling the alleged assault on a Delhi bureaucrat a “conspiracy”, the ruling AAP on Wednesday said that its two MLAs — Prakash Jarwal and Amanatullah Khan — were arrested in the case without any inquiry because they belonged to the Dalit and Muslim community respectively.

Based on the allegation of assault made by Chief Secretary Anshu Prakash, the two were arrested on the BJP’s instructions without being given a chance to state their version, senior Aam Aadmi Party (AAP) leader Sanjay Singh told the media.

He said the police ignored the evidence on the attack on AAP Minister Imran Hussain and his personal secretary Himanshu Singh but acted on the statement by the Chief Secretary.

“We have the video footage of what happened at Delhi Secretariat yesterday (Tuesday) when our Minister and his Personal Secretary were attacked by a mob that was incited by the BJP but nothing has been done about it.

“Words of the Chief Secretary are being treated as gospel truth,” he said, adding the top bureaucrat was making “false” allegations.

Party leader Ashutosh alleged that on Tuesday people outside the Delhi Secretariat were provoked and that led to the commotion and beating up of Hussain and his aide.

“CCTV footage should be made public to identify the perpetrators,” he demanded.

Singh said there was a conspiracy against their party and people were “strategically” brought to the Secretariat.

“Will the same country have different rules for different people?” Singh questioned.

The AAP leader said that an emergency meeting was convened on Monday night to address the issue of 250,000 families who were deprived of food rations due to faulty implementation of Aadhaar.

“When the Chief Minister (Arvind Kejriwal) can visit people at 2 a.m. or 3 a.m., why can’t there be a late night meeting regarding the important issue of rations?

“If somebody dies of hunger in the state, will the Chief Secretary be answerable or will it be the Lt Governor (Anil Baijal)? Arvind Kejriwal will be questioned,” he said.

According to the AAP leader, the Chief Secretary, who has alleged that AAP MLAs assaulted him in the presence of Kejriwal during the meeting, would have called police immediately after the incident if he was actually assaulted.

“Anybody physically assaulted by someone would immediately call the police. Why didn’t the Chief Secretary do so? The next morning he started making these allegations against our MLAs.

Asking why the Chief Secretary’s injury report wasn’t prepared by a doctor on the same day, Sanjay Singh said: “The medico-legal certificate is coming today when the incident happened three days back.”

Stressing that this was a BJP-led Central government’s conspiracy against the AAP, he said: “To be associated with AAP is considered to be a crime by the Centre.

“AAP is always the soft target. The government now wishes to take the attention away from Nirav Modi, (Vikram) Kothari, Jatin Mehta and that is why this thing was brought up.”

“Since the very beginning, there have been attempts to finish our government in the state. They don’t want us to function.”