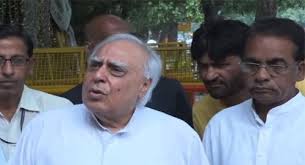 “The CAA has been choreographed to further polarise India as part of a larger Hindutva enterprise,” he told and added, to plead innocence was “nothing but a well thought strategy of Modi.”

“The Prime Minister should be more concerned about the loss of precious lives that the Constitution, to which he has taken the oath, protect. Not a word of anguish for them. Loss of property can be compensated, but those dead are lost forever to their families.” he said.

Terming the Prime Minister”s anger over damage to public property as selective, Sibal said Modi didn”t say a word when the Jat agitated in Haryana in 2016 demanding the OBC status and damaged over Rs 20,000 crore public properties. He was also silent when violence erupted, following conviction and sentencing of Gurmeet Ram Rahim Singh in Haryana, Punjab, UP and Delhi.”

But this time, without ascertaining facts, he was blaming the protesting students. “The Prime Minister is pointing a needle of suspicion to a political party. The fact that violence erupted in BJP-ruled states should worry him. This could be a well thought-out plan to justify the brutality perpetrated on the students, a strategy to which the administration in BJP-ruled states may well be complicit,” the Congress leader said.

Cautioning the Prime Minister, he said Modi should recognise the rising tide of discontent among the young due to his party”s divisive policy prescriptions and arrogance of university administrations.