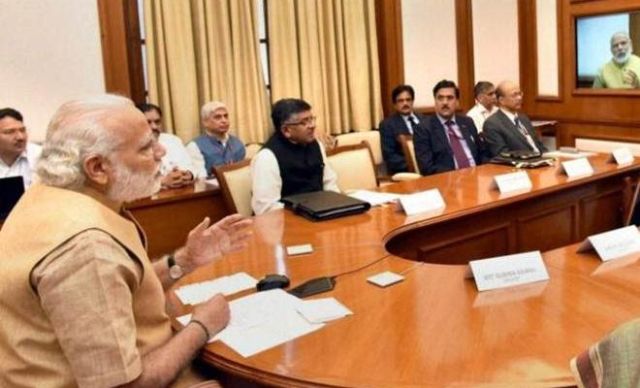 New Delhi : The Union Cabinet on Saturday approved an ordinance that provides for death penalty to those convicted of raping a child below the age of 12 and life term for raping a girl below age of 16.

The Criminal Law (Amendment) Ordinance, 2018, approved at cabinet meeting presided over by Prime Minister Narendra Modi, seeks to provide effective deterrence against rape and instill a sense of security among women, particularly young girls in the country.

The government also decided to put in place a number of measures for speedy investigation and trial of rape cases including a two month time limit for investigation, two months for completion of trial and six months for disposal of appeals.

There will be no provision for anticipatory bail for a person accused of rape or gang rape of a girl under 16 years.

The Cabinet also decided to strengthen investigation and prosecution including setting up fast track courts, and special forensic labs in each state besides maintaining a national database of sexual offenders.

The ordinance came in the wake of a nation-wide outrage over rape and murder of an eight-year-old girl in Kathua in Jammu and Kashmir, and other instances in different parts of the country including rape of a nine-year-old girl in Surat.

Sources said the government has taken a serious note of the rape incidents in the country and has decided on a comprehensive response to deal with the situation, with the ordinance approved in view of urgency and seriousness of the issue.

The ordinance seeks to amend the Protection of Children from Sexual Offences (Pocso) Act by stringent provisions in case of rape of children and minors.

It provides that punishment for rape of a girl under 12 years will be minimum 20 years imprisonment or imprisonment for rest of life or with death.

Punishment for gang rape of a girl under 16 years of age will invariably be imprisonment for rest of life of the convict.

In case of gang rape of a girl below 12 years, punishment will be imprisonment for rest of life or death sentence.

The minimum punishment in case of rape of women has been increased from rigorous imprisonment of seven years to 10 years, extendable to life imprisonment.

In case of rape of a girl under 16 years, minimum punishment has been increased from 10 years to 20 years, extendable to imprisonment for rest of life, which shall mean imprisonment till that person’s natural life.

The ordinance also provides that court has to give notice of 15 days to Public Prosecutor and the representative of the victim before deciding bail applications in case of rape of a girl under 16 years of age.

The Cabinet also approved a number of important measures in order to give effect to the legal provisions and to improve the capacity of criminal justice system to deal with rape cases.

There will be dedicated manpower for investigation of rape cases in a time-bound manner. Police Stations and hospitals will be provided with special forensic kits for rape cases.

Special forensic labs will be set up in each state and union territory to deal exclusively with rape cases.

The measures will form part of a new mission mode project to be launched within three months.

As part of measures to strengthen the national database, the National Crime Records Bureau will maintain a national database and profile of sexual offenders, and this will be regularly shared with states and union territories for tracking, monitoring and investigation, including verification of antecedents by police.

The present scheme of One Stop Centres for assistance to victim to be extended to all districts in the country.