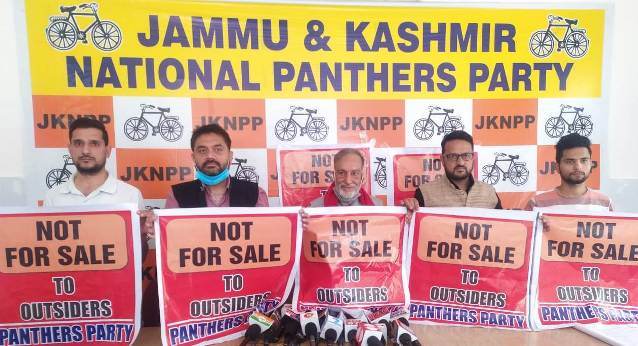 Jammu/ New Delhi: Stoutly opposing the Indian government’s decision of allowing outsiders to buy property in Jammu and Kashmir, Prof. Bhim Singh’s Panthers Party today released posters with the slogan, ‘Not for sale to outsiders’ to launch a campaign against it. He termed the home secretary’s order as ultra vires of the Constitution and against the spirit of Instrument of Accession.  He said the poster campaign will reach every door, house, field, factory, shop and other establishments all over the State of Jammu and Kashmir now comprising Jammu-Kashmir and Ladakh.

Criticizing the Indian government for changing the lands law through executive orders, Prof Singh said the Panthers Party strongly feel that these order are ultra vires of the Constitution and against the spirit of Instrument of Accession signed by then Maharaja Hari Singh on October 26, 1947 and further signed and accepted by the Governor-General of India, Lord Mountbatten on October 27, 1947.

The campaign is meant to lodge direct public protest through peaceful means in the entire state against the Indian government’s decision, he added.

He further said that it will continue till the black law issued through a dictatorial administrative order by the Home Secretary is not taken back.

The posters with the slogan, ‘Not for sale to outsiders’ will be in the shape of handwritten banners, cardboards, clock pieces, flexes and other modes of display. The residents will make it themselves by translating it in their own language including Dogri, Kashmiri, Ladakhi, Pahari, Gojri and other languages spoken in the state.

Prof Singh said the party leaders and workers will run the poster campaign in every nook and corner of the state.

Every resident will be motivated to create his/her own poster in the language of choice and display and the campaign shall pick up in a phased manner and pick up accordingly, he added.

People in the Kashmir Valley and Ladakh are already up in arms against the new land laws and domicile laws. People of the state observed a complete shutdown against these laws.  All the mainstream parties expressed grave concern over executive orders  saying it is  an attack on their identity and changing the demography of the state. Since the Indian Government stripped it of special status from the state on August 5, last year, turned it into two union territories, a couple of changes were made in the statue of the J&K  to change the erstwhile state’s demography.