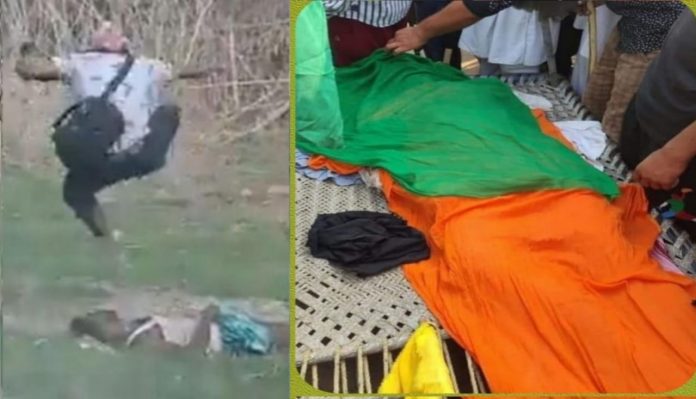 In recent weeks two terrible carnages orchestrated by the BJP people, supported by their governments in two states have shocked the conscience of India, at a time when the nation was observing the birth anniversary of Mahatma Gandhi, the apostle of peace and non-violence. Indeed, the people of India were shocked at such crass violence where the police was apparently complicit, and where the BJP governments at the Center and the two states have been totally indifferent if not complicit in the gross injustice to the masses.

On September 22, 2021, the Assam state police tried to evict using harsh violence, about 800 families of landless, poor agricultural laborers in the village of Gorukhuti, Darang, from their shanty town on a piece of land that belongs to the government. Majority of these people are Muslims, both Assamese speaking and Bengali speaking, who have lived in this shanty town for several generations. The police fired on the protesting peasants and beat them with batons, killing two people and injuring ten people. The Assam BJP Chief minister, Himanta Sarma, made the brazen statement that his government wants to give this land to Assamese Hindus to do farming on it and others should be evicted. He described those being forcibly evacuated to some unknown location, in derogatory terms as Bangladeshi Muslim infiltrators.

In fact, it is not only the Assam Chief minister who describes Indian Muslims living in Assam in such terms; just a few months ago in March India’s Prime Minister Modi, speaking at a public rally in Assam, described Muslim citizens living in South Assam in similar terms and pledged to expel them. And last year Amit Shah, India’s Home minister in the BJP government, described the same people several times as vermins, to be expelled.

The facts about Assam’s population are that for over a hundred years before India’s independence, the then British-Indian government relocated a lot of people from densely populated Bengal to Assam that was very thinly populated and underdeveloped, with a view to develop Assam. Thus, a lot of people living in Assam for many generations are ethnic Bengali, both Hindu and Muslim. Modi’s BJP government has declared all Bengali speaking Hindus in Assam to be Indian citizens and all Bengali speaking Muslims as mostly illegal infiltrators. The obvious BJP project is to make all Hindus living in Assam to vote for BJP. And to isolate the Muslims of Assam, who are 35% of Assam population, reduce their population substantially, render them second class citizens, take away their right to vote in the elections.

The photos of terrible police brutality on the poor people of Gorukhuti being evicted shocked the conscience of India. For a few days some media outlets published reports on the carnage, and a few junior leaders of the opposition secular parties e.g., Congress, Samajwadi party, Bahujan Samaj party etal condemned the atrocities. But no senior leader from any of these parties either made strong protests or an effort to visit the families of dead and injured victims, or asked the Assam government to give compensation to them or have pledged to get them justice. Of course, the Assam govt and police stoutly defended their hostile action by making false statements that the peasants being evicted had attacked the police party with bows and arrows.

In the first week of October, 2021, just ten days after the terrible BJP genocidal action in Darang, Assam, the BJP Modi government’s minister of state for Home Affairs, Ajay Mishra, who is from Lakhimpur Kheri, addressing a public rally threatened the large farming community in Lakhimpur and its adjoining district of Bahraich. This farming community is very sympathetic to the year-long Indian farmers movement that is opposing the BJP government’s laws, enacted last year, to turn over farming largely into the hands of private corporations. Minister Mishra told a rally of BJP people that before he became a minister he was known for long as a tough guy, and that he has the means and can throw out these farmers outside Uttar Pradesh in just two minutes.

When minister Ajay Mishra organized a rally in Lakhimpur, on October 3, where he invited the deputy chief minister of Uttar Pradesh, Maurya. A large number of farmers from Lakhimpur and Bahraich held a protest rally near the site of Mishra’s rally. At the end of their rally as the farmers were returning home, three cars of BJP workers including Ashish Mishra, forty-year-old son of minister Ajay Mishra, came from behind at high speed and ploughed into the crowed of farmers, killing four of them and injuring about ten. Subsequently Ashish Mishra jumped out of the car and escaped into the sugarcane crop while shooting at the people who were pursing him, from his pistol and ran away. The police on the spot also fired at the people who were pursuing Mishra.

This awful, violent incident shook up the nation in rage against the brazen and violent action of minister Mishra’s son. Not only the media but most opposition political parties, including the secular parties and their top leaders protested loudly and travelled to Lakhimpur to meet the families of the victims, who are Sikhs and Hindus. They also courted arrest and have announced plans for continuing protest rallies to get justice to the victims of the violence. The Uttar Pradesh BJP government and also the opposition parties have announced compensations to the families of the dead and injured.

The strong sympathetic protest movements of the opposition secular parties e.g., Congress party, Samajwadi party, Bahujan Samaj party, Communist party etal for wanton violence on the farmers rally in Lakhimpur (U P), and to get justice to the victims should be applauded by all. Surely, that is the legacy of India from the freedom fighters and many past leaders of the nation. But when we look at the support by the same parties and their top leaders to the poor peasant victims of the police and government carnage in Darang, we find their responses as mild, lukewarm and quiet. Why such a contrasting attitude? I hope it is not because the majority of victims in Darang, even though Indians, were mostly Muslims. I am hopeful that they will act equally strongly to get justice to the victims in Darang.
***
The writer is executive director of Association of Indian Muslims of America, Washington DC.